These images of military tanks were taken in Iraq, not Myanmar

Two images have been shared hundreds of times in multiple posts on Facebook alongside a claim they show Myanmar army tanks that were destroyed by the anti-coup rebels. The claim is false: the photos in fact show two different Iraqi military incidents in 1991 and 2013.

The photos were published here on Facebook on May 25, 2021. The post has been shared more than 760 times. 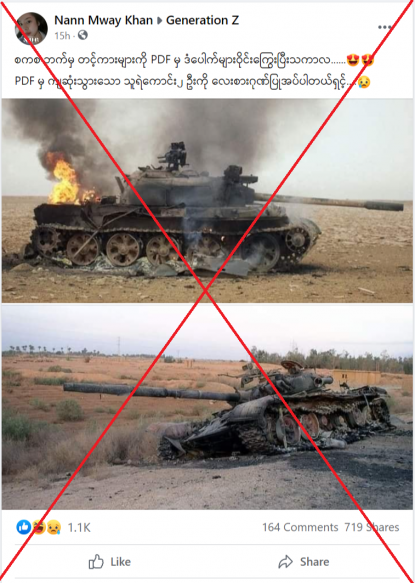 The post’s Burmese-languauge caption translates to English as: “Tanks from SaKaSa [State Administration Council of Myanmar] got attacked by PDF [People Defense Forces]. Honour our two fallen heroes from PDF”.

The People Defense Forces (PDF) was formed “to protect civilians, as the police and military deploy deadly arms against anti-coup protesters” in early May, 2021, according to an AFP report here.

The misleading posts circulated online after the Karenni People Defense Forces (KPDF) claimed its fighters had destroyed two tanks from the Myanmar military in Kayah State in Myanmar on May 25, 2021. The KPDF claimed its fighters were also killed in the attack in an update on Facebook published here.

But the Myanmar military told the media in an email on May 28, 2021 that their tanks had not been destroyed by the armed group.

The photos were also published alongside a similar claim on Facebook here, here, and here.

A Google reverse image search found the first image was published here by the Associated Press news agency on February 27, 1991.

The photo shows a damaged tank during the Gulf War, according to the caption.

The photo’s caption reads: “An Iraqi tank goes up in flames after being hit on Monday, Feb. 27, 1991 in Iraq, by a TOW missile fired form the U.S. Army’s 82nd Airborne Division. (AP Photo/Tannen Maury)”.

Below is a screenshot comparison of the photo in the misleading post (L) and AP’s photo (R):

Here is a Britannica Encyclopedia timeline of events in the Gulf War, which ended in a ceasfire on February 28, 1991.

According to the photo’s description, it was taken on April 13, 2003 in Iraq.

Below is a screenshot comparison of the photo in the misleading posts (L) and the NARA’s photo (R) :

“Operation Iraqi Freedom” refers to an assault launched on March 20, 2003 by the US military and its allies on Saddam Hussein’s regime.

The events were also described here on the US Naval History and Heritage Command website.