It has been shared more than 3,000 times. It purports to show the number of coal-fired power stations in a selection of countries around the world.

"AUSTRALIA is planning to shut down their remaining 6 plants and save the planet!”

Excluding Australia, the post claims that 5,615 coal-fired power stations are operational or being built in the selected countries -- 3,700 active and 1,915 under construction. 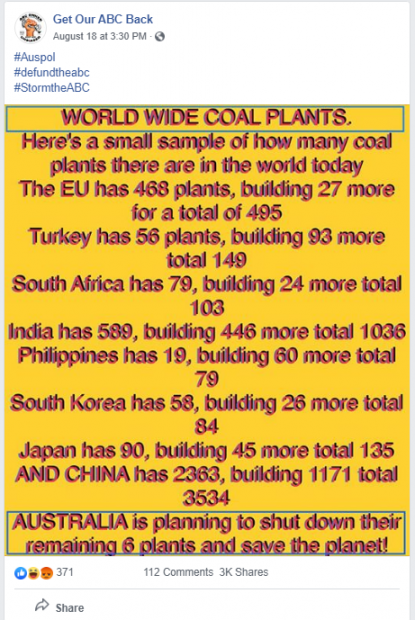 The figures in the list are out of date. AFP located the current figures for the number of active and under construction coal-fired power plants in the listed countries.

According to its website, the Global Coal Plant Tracker “provides information on all existing coal plants of 30 MW or larger, as well as every plant proposed since January 1, 2010.”

The Global Coal Plant Tracker provides summary statistics for the number of coal-fired power plants per country here, as well as by region here.

As of July 2019, the Global Coal Plant Tracker shows:

Excluding Australia, the countries listed have 1767 operational coal-fired power plants and a further 196 under construction, for a total of 1963.

A list of the 20 coal-fired power plants in operation in Australia can also be found on the Australian Clean Energy Regulator’s website here, which was published on March 25.

The misleading posts wrongly claimed there were 3,700 operational coal-fired power plants and 1,915 under construction, for a total of 5,615.

A Google search for the numbers and keywords referenced in the misleading posts shows that its text appears to have been sourced from this January 2019 post on a blog called The Saltbush Club.

The blog describes its purpose as follows: “All Saltbush members are concerned that climate-alarm policies promoted by most politicians are not based on sound science, and are already causing great damage to Australian industry, jobs and consumers.”

The January 2019 post on The Saltbush Club links back to this July 2017 by a blog called Watts Up With That, which describes itself as “the world's most viewed site on global warming and climate change”.

The post features a graphic which was first published alongside this article published by British newspaper The Times in December 2015, which shows the figures used in the misleading Facebook posts.

Below is a screenshot of the graphic in the Times’ article: 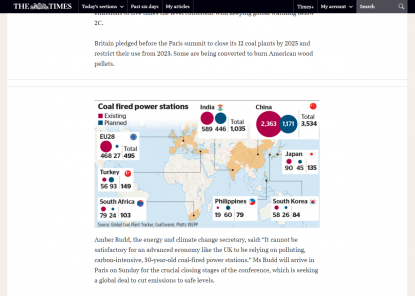