A post shared widely on Facebook contains an image which purports to show Philippine opposition Senator Franklin Drilon sleeping during a hearing on the reintroduction of the death penalty. The claim is false; the picture is a screengrab from an animated GIF which was originally posted as satire.

The post was published here on August 8, 2019 and shows Drilon with his eyes closed and his mouth open with an out of focus view of the Philippine Senate plenary hall in the background. 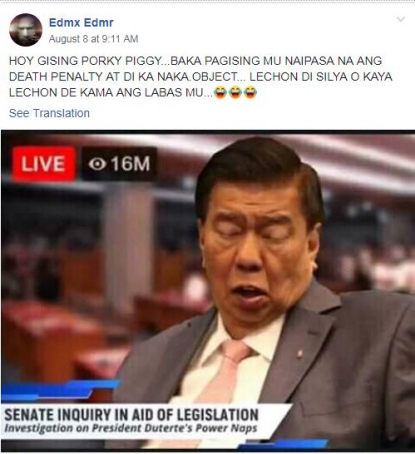 When translated to English, the caption says: “HEY WAKE UP PORKY PIGGY… WHEN YOU'VE WOKEN UP THE DEATH PENALTY MAY HAVE ALREADY BEEN PASSED AND BY THEN YOU'VE FAILED TO STATE YOUR OBJECTION… YOU'LL EITHER END UP AS LECHON IN CHAIR OR LECHON IN BED.”

Drilon, who was re-elected to the Senate in 2016, is a member of the opposition Liberal Party.

Porky is a slur used against him by his critics.

Lechon or roasted suckling pig is a Filipino dish.

Capital punishment was outlawed in the Philippines in 1987, reinstated in 1993 and abolished again in 2006.

Since mid-term elections in May 2019, Philippine President Rodrigo Duterte has urged Congress to bring the death penalty back, according to this AFP report.

Various senators have introduced bills seeking the restoration of capital punishment since Congress resumed on July 22, as seen here, here, here and here.

A Google reverse image search traced the image in the misleading post to a five second animated graphic interchange format (GIF) file on image hosting website Gfycat. The uncropped version of the image reveals a disclaimer that marks the GIF as “political satire”.

Below is a screenshot of the gif site: 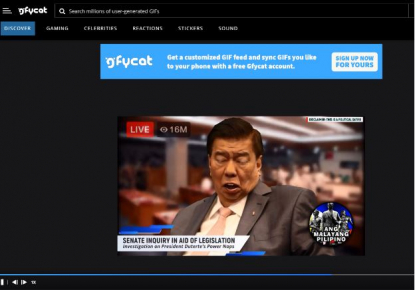 The GIF also shows a logo with the words “Ang Malayang Pilipino” (in English, “The Free Filipino”).

The animated image hosted on Gfycat was excerpted from a 5:54 video purporting to show Drilon sleeping in the Senate chamber, accompanied by sound effects to give the impression that the senator was snoring.

The video was posted on November 19, 2018 -- more than eight months before Senate hearings on the death penalty began.

The post's caption, which contains three clear disclaimers that the content is satirical, says in part: "Senate Inquiry In Aid Of Legislation - Investigation on Duterte's Power Naps. (disclaimer: this is a political satire.)"

Numerous comments on the satirical post indicated that despite the disclaimers, at least some viewers believed the video was real:

When translated into English, this one reads: “OH NO OH NO HE'S SLEEPING AGAIN…JUST GRILL HIM INTO A LECHON”