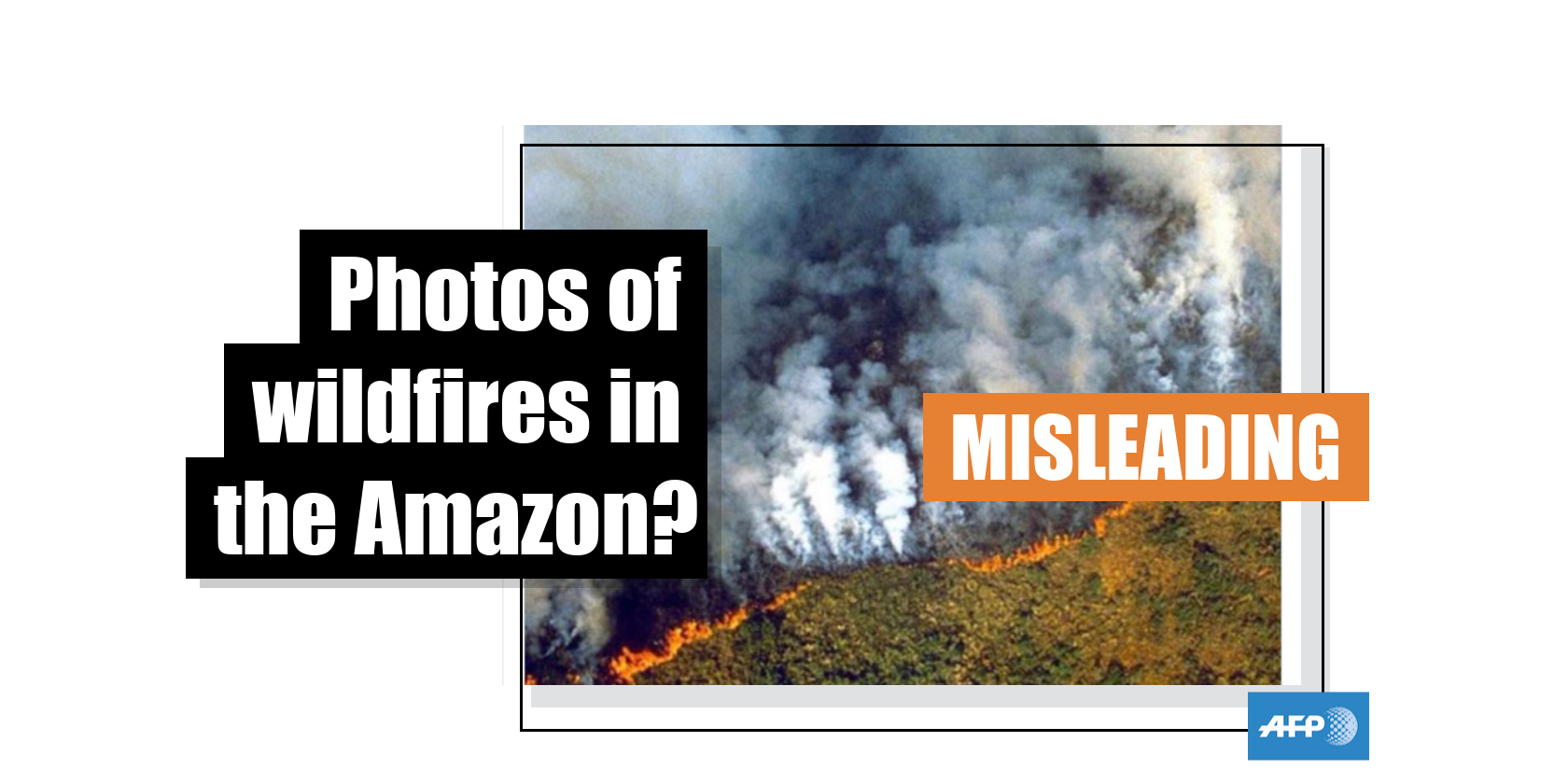 #PrayforAmazonas: Thousands of people are sharing old pictures in posts about the Amazon rainforest fires

This week saw an outpouring of social media posts decrying forest fires in the Amazon rainforest, many of them under the hashtag #PrayforAmazonas. But some of the most viral posts are misleading, including either photographs of the Amazon that are years old or images taken in other parts of the world. Using a reverse image search, a simple tool to check when a photo first appeared online, we’ve been able to trace the origins of some of the pictures being shared out-of-context.

Tennis star Novak Djokovic was among those to post one of the most widely-shared misleading images, showing a diagonal line of fire spreading across a forest as smoke billows above. “Heartbreaking,” Djokovic wrote in the post, which was retweeted more than 8,000 times. We’ve archived the tweet here. 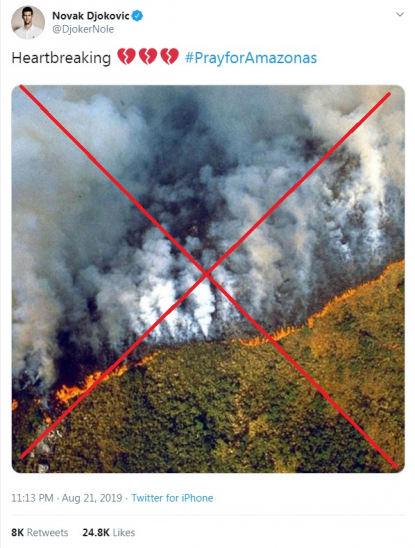 Jaden Smith, the rapper son of actor Will Smith, also posted the photo on his Instagram account, gaining more than 1.4 million likes. “The AMAZON Rain FOREST IS ON FIRE THIS IS TERRIBLE IT’S ONE OF THE BIGGEST CARBON SINKS IN THE WORLD, Spread The Word,” he wrote.

In fact, the photo does show the Amazon rainforest -- but while many people seeing it posted this week might assume that it was taken recently, it is actually 30 years old. You can find it here in this slideshow by Britain’s Guardian newspaper. As per the caption, it shows a fire in the Amazon in June 1989. The photo is credited to French photo agency Sipa Press / Rex features.

An image by a photographer who died in 2003

French President Emmanuel Macron was among those sharing this photograph of a huge plume of smoke billowing into the sky. “Our house is burning. Literally. The Amazon rain forest - the lungs which produces 20% of our planet’s oxygen - is on fire. It is an international crisis. Members of the G7 Summit, let's discuss this emergency first order in two days! #ActForTheAmazon,” he tweeted, earning more than 25,000 retweets. 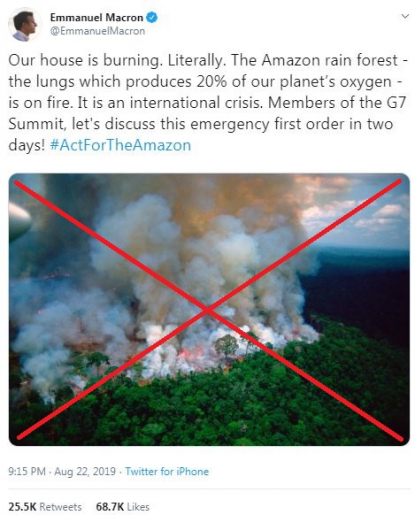 But again, this is an old photo. A reverse image search showed that it was taken by Loren McIntyre, a photographer known for his work with National Geographic. You can find the image here on the website of photo agency Alamy. While we have not yet been able to determine the date when this particular image was taken, McIntyre died in 2003 -- meaning this photo must be at least 16 years old.

A monkey holding her baby… in India 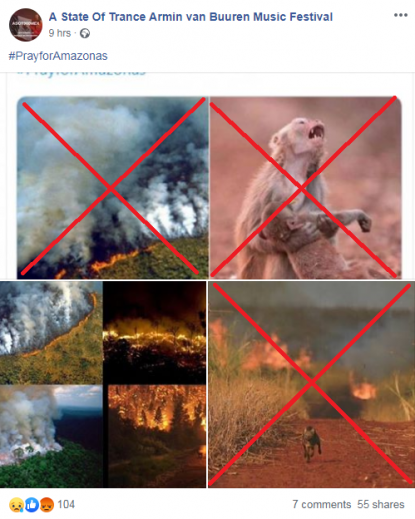 As for the picture of a monkey holding her baby, it was actually taken in the central Indian city of Jabalpur in 2017 by the photographer Avinash Lodhi. In an interview with Britain’s Telegraph newspaper, he explained how the monkey appeared to cry out in worry when her baby collapsed.

The post further includes a photograph of an unidentified animal running from a fire. A reverse image search allowed us to trace the photo to this Brazilian news article from 2011 reporting on wildfires in the southeastern city of Ribeirao Preto. The city is at the other end of the country from the Amazon, which covers much of northeast Brazil and stretches into Peru, Colombia and other countries.

Another widely-shared photo, seen below in a Facebook post with 1,700 shares, shows a burning forest from ground level.

Many online users might assume this is a recent photo, but it was taken back in 2014

This one was taken in the Amazon in 2014 -- you can see it here on the website of photo agency Getty Images.

And finally, there’s this photo showing a badly burned rabbit, which was shared among other places in this post retweeted more than 500 times. Again, a reverse image search allowed us to determine that the photo isn’t from the Amazon -- it was taken last year during a wildfire in California. 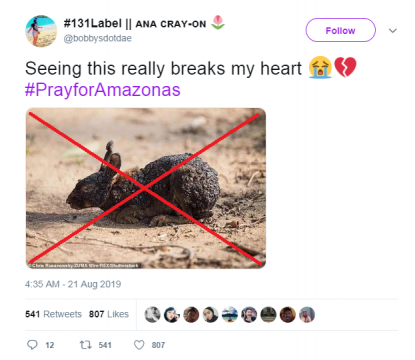 This photo actually shows a rabbit caught up in a wildfire in California, not the Amazon

What’s happening in the Amazon?

The short answer is, it’s difficult to know right now.

It’s clear that the issue of forest fires in the Amazon has clearly set social networks alight: as reported by AFP, #PrayforAmazonas was the world’s top trending hashtag on Wednesday, racking up more than 249,000 tweets.

But while thick smoke has blanketed several Brazilian cities in recent days, including  Sao Paulo, it hasn’t yet been possible to measure the size of the area currently affected by the fires.

According to official figures, nearly 73,000 forest fires were recorded in Brazil in the first eight months of the year -- the highest number for any year since 2013. Most were in the Amazon.

That’s a sharp increase from 2018 when there were 39,759 fires in the same period, according to Brazil’s National Institute for Space Research (INPE).

NASA has published satellite images of the forest, taken on August 11 and August 13.

Their data suggests, however, a different picture from that given by INPE. “As of August 16, 2019, satellite observations indicated that total fire activity in the Amazon basin was slightly below average in comparison to the past 15 years,” NASA said.

Why are the fires happening?

“Deforestation explains most of the fires,” Paulo Moutinho, a researcher at the Amazon Environmental Research Institute (IPAM), told AFP.

“The fires are always human in origin. Fire is used to clean areas that have already been deforested, to open areas or to prepare land for cultivation. The lack of prevention means these fires spread to drier areas which were not supposed to be burned,” he explained.

Moutinho estimated that of the entire Amazon Basin area, 20 percent -- landmass roughly equivalent to that of France -- has been deforested.

How to perform a reverse image search

If you’re trying to determine whether a photo is recent or not, a reverse image search can be extremely useful.

Right-click on a photo and choose “search Google for image”. The search results may to point to clues as to whether the photo is months or even years old. You can also use specialised reverse image search engines, such as TinEye or Yandex.