Posts shared thousands of times on Facebook and Twitter in Nigeria claim to show pictures of late Zimbabwean strongman Robert Mugabe’s “17 billion casket”. This is false; the photographs can be found online as early as 2007 and show a rather unusual computer case, made in the form of a coffin.

One of the Facebook posts, which we archived here, claims to show “17billion worth of Robert Mugabe's casket has been computerized in such a way that after his interment, his family can watch his remains through their phone devices”.

The post, which has been shared nearly 500 times, goes on to claim: “According to the London Casket makers that supplied the casket, the facilities in it will protect his remains from decomposing for the next ten years...this however implies that, apart from relating with his family, any member of his family that wishes to watch his remains in the tomb will have to access same via his or her phone devices.”

Another version of the post has been shared over 800 times on Facebook, while a tweet made similar claims but said the casket was made in Singapore. 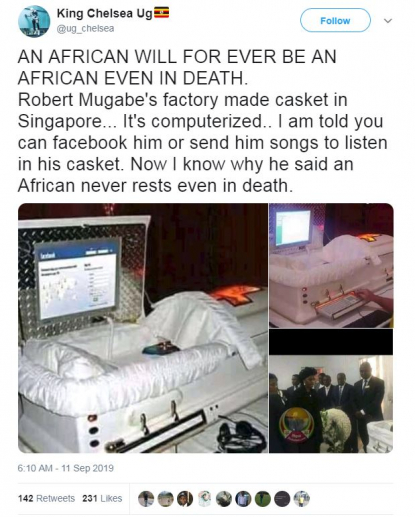 Screenshot of a tweet taken on September 13, 2019, claiming to show Robert Mugabe's coffin

Many other versions of the same narrative have been shared elsewhere on Facebook and on blogs in Nigeria and Zambia. This Zambian Observer post claims “the casket is a marvel, it’s connected to electricity, fitted with a thermostat and a reclinable pillow”.

An old picture of a creepy computer

We ran a Google reverse image search for the pictures, and found that they had existed on the internet as far back as 2007 -- 12 years before Mugabe’s actual death in September 2019.

The photos, it turns out, show a computer case “mod”.

Modding, or case modification, refers to the process of customising a computer case or a video game console chassis to suit one’s personal needs or whims. Some particularly ambitious examples of case modding, from a computer turned into a coffee table to one turned into a wheel, can be found here.

The earliest blog post we could find that featured the pictures was on the tech blog Bit Rebels, which according to our Google search was posted on November 16, 2013. Bit Rebels in turn cited the website Vinodlive. The page has since been taken down but we were able to find an archived version dating the post to 2007.

We also found a Pinterest post, archived here, which claims "the Coffin PC took the prize for best Case Mod at Quakecon 2003. A white child-size coffin with the keyboard that gently slides out of the side, LCD in the inside lid, water cooling, custom front panel buttons, lighting and more”.

QuakeCon is an annual modding convention in the US state of Texas where designers compete for a prize, based on the ingenuity of their case mod. Sure enough, we found a photo of the coffin in QuakeCon’s archive for the competition on August 14-17, 2003, at Adam's Mark Hotel in Dallas, Texas. A screenshot taken on September 13, 2019, showing the case-modded PC made from a four-foot child's coffin.

Robert Mugabe, former president of Zimbabwe, died in Singapore on September 6 aged 95. His remains were returned to Zimbabwe, and arrived at his home on September 11. Here is an AFP video of Zimbabwe’s casket -- and it looks nothing like the false posts suggest.