No, Mugabe didn’t make this quip about Queen Elizabeth II during a CNN interview

A Facebook post recounting a retort supposedly made by the late Zimbabwean president Robert Mugabe during an interview with CNN has been shared nearly 1,500 times. Asked about his decades-long grip on power, Mugabe supposedly shot back at Christiane Amanpour by asking if she had ever posed the same question to Britain’s Queen Elizabeth II. However, AFP has gone through the 23-minute interview and established there was neither an instance when Amanpour asked the question as it appears in the post, nor a response by Mugabe referring to the queen.

Amanpour interviewed Mugabe in September 2009, the first sit-down she said the then-president had had in five years. The interview came ahead of the 64th UN General Assembly in New York, where the Zimbabwean leader accused western countries of imposing illegal sanctions on Zimbabwe. Here is Mugabe’s full speech from the day.

Since Mugabe died on September 6, a 2013 Facebook post bearing the ‘queen’ anecdote has re-emerged online and has now been shared more than 1,400 times.

“CNN Interviewer Amanpour: ‘Mr President, don't you think 89 years old would have been a great time to rest and retire?’

President Mugabe: ‘Have you ever asked Queen Elizabeth this question, or is it just for African leaders?” the post reads.

While Mugabe would have been 89 in 2013, when the Facebook post was published, the interview with Amanpour had taken place back in 2009 when he was only 85 -- the first sign that the post was not accurately quoting from the CNN interview. 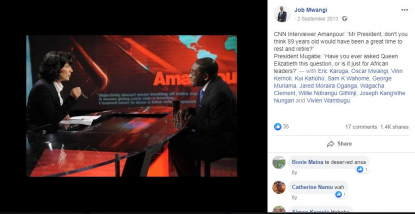 A search online for Amanpour’s encounter with President Mugabe led us to this 23-minute video of the full interview on CNN’s website.

Listening through the interview, Amanpour at no point asks Mugabe the question as it appears in the misleading post, and throughout the interview there is no mention of Queen Elizabeth II.

However, on several occasions, Amanpour asks Mugabe about his determination to hold onto power.

At 20.15, Amanpour asks: “Why is it so difficult to leave power in a reasonable way when you are up, instead of waiting until it gets to this stage?”

Mugabe responds: “You do not leave power when imperialists dictate that you leave.”

Amanpour interjects: “No imperialist, you are the president.”

At 22.09, Amanpour posed the same question differently to Mugabe -- this is how the conversation went.

Amanpour: “I guess I want to know why, why to hang on for so long.”

Mugabe: Elections don’t go all that smoothly all the time. In many countries that is the situation. Look at what happened elsewhere.”

Mugabe held on to power for 37 years before he was finally ousted in November 2017, when his previously loyal military generals turned against him.

The strongman is on the record as having made outrageous remarks such as “Only God who appointed me will remove me” and “I am still the Hitler of the time,” among others -- you can read an AFP round-up of some of his most famous quotes here.

We did not find any record of him making a quip about Queen Elizabeth II similar to that quoted in the misleading post.

Fired for wearing a hijab: truth and fiction on Quebec’s secularism law