Multiple Facebook posts shared thousands of times share photos they claim show two Chinese maritime militia vessels blown up by Indonesian authorities in April 2019. The images have been shared in a misleading context: they actually show a Vietnamese fishing vessel and a Nigerian-flagged poaching boat, which was wanted by Interpol.

It was shared more than 2,000 times after being published by a Facebook page with more than 200,000 followers.

The images show one partially sunken boat and another burning vessel.

It claims they are “undoubtedly from the Chinese Militia” and were blown up by Indonesian authorities in April 2019.

The post’s caption reads in part: “China couldn't do anything because it was the policy of Indonesia that no foreign boat caught fishing within its maritime territory escapes being blown to bits after its crew are taken off board. I am posting this to belie the assertion of Duterte that if he makes an overt action to seize or shoo away the Chinese militia boats - China will declare war.” 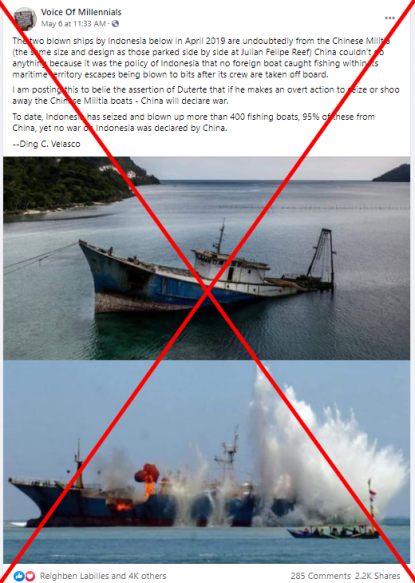 The post circulated online after President Duterte said in April 2021 that war was the only way the Philippines could “take back” disputed areas in the South China Sea.

Duterte is facing increasing pressure to take a harder stance against Beijing’s activities in Philippine waters.

The photos were shared alongside identical claims on Facebook here, here and here.

But the photos have been shared in a misleading context.

The photo's caption reads: “A Vietnamese fishing boat caught fishing in Indonesian waters is seen sunk off the coast of Natuna.”

There is no information in the article about when the boat was caught or if it was eventually destroyed.

Below is a screenshot comparison of the photo in the misleading post (L) and the photo in The New York Times article (R):

Another reverse image search on TinEye found the second photo was taken on March 14, 2016 by photo agency NurPhoto.

The same image was shared here by Getty Images with credit to NurPhoto.

The caption states in part: “Mrs. SUSI PUDJIASTUTI, Minister of Fishing and Maritime Indonesia, lead the demolition process of VIKING Ship that have been chased by International Police especially Norwegian and caught in Indonesian sea.”

The “Viking” was a Nigeria-flagged poaching vessel, according to this report from the Washington Post.

Below is a screenshot comparison of the photo in the misleading post (L) and the Getty Images photo (R):