An image shared by an aide to Nigerian President Muhammadu Buhari purports to show packages of food with money attached, allegedly distributed to crowds at a recent campaign rally held by Atiku Abubakar, a candidate in the February 2019 presidential election. The image is actually of donations made to poor and homeless people in February 2017 by a charity based in Lagos. There is no evidence that Abubakar’s campaign distributed food packages with money during the rally.

On December 3, Abubakar and his Peoples Democratic Party held the rally in Sokoto state, northwest Nigeria, ahead of elections in February 2019 where he is expected to be the main challenger to Buhari and his All Progressives Congress party.

Northwest Nigeria is a key base of support for Buhari, who was born in neighbouring Katsina State.

On December 4, the president’s aide, Lauretta Onochie, tweeted an image referring to the rally with the message, “Keep them in poverty, then give them handouts - Atiku in Sokoto yesterday”. 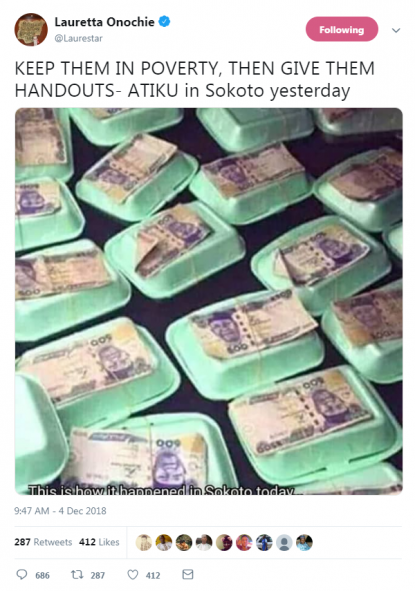 (A screenshot taken on Thursday, December 13, 2018, of a tweet by Lauretta Onochie claiming that Atiku Abubakar distributed food attached with money at a campaign rally in Sokoto. )

A Facebook user, Zara Gift Onyinye, also posted the same picture with the message, "This is how it happened in Sokoto today...Shameless to say the least". The post was shared more than 2,300 times. 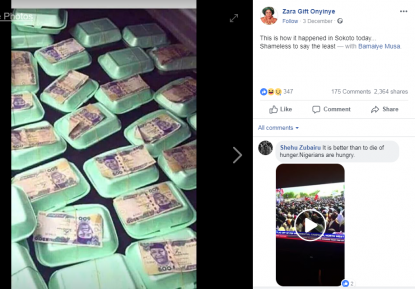 (A screenshot taken on December 13, 2018 of a Facebook post by Zara Onyinye claiming to show packages of food and money distributed at a campaign rally held by Atiku Abubakar.)

Using a reverse image search, the earliest use of the photo found by AFP was in an article by Naijagists.com on February 20, 2017.

On February 21, 2017, the image was also published by the website Kemifilani.com, showing a Nollywood actress donating packages to poor communities in Lagos on Valentine’s Day.

Abubakar is a wealthy businessman and a former vice-president. Since he was announced as candidate for the opposition People’s Democratic Party in presidential elections in February 2019 numerous social media accounts have released false information regarding his wealth.

In October, Abubakar released a statement distancing himself from an online grant scheme posted by accounts purporting to represent his campaign, which promised users money in exchange for political campaigning.