No, this lion was not killed by a hunter in Kogi state, Nigeria

A viral Facebook picture claims to show a lion killed by an ethnic Igala hunter in Kogi state, central Nigeria, in December. The claim is false. There are no known sightings of lions in Kogi state and the picture already appeared in a post labelled as Angola in March 2018.

On November 7, Facebook user “Engr Solomon” posted a picture with the message: “This great Igala Hunter killed the lion yesterday (6th December, 2018) at Ogbonicha.” Ogbonicha is a town in Kogi State. The post has been shared more than 13,500 times. 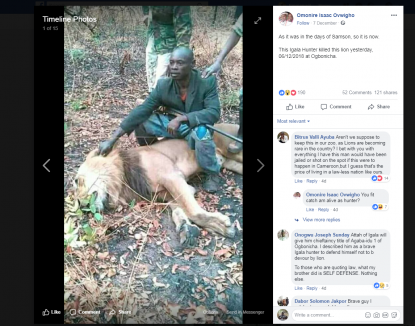 (A screenshot taken on Thursday December 13, 2018 of a Facebook post claiming to show a lion killed by a Igala hunter in Kogi State, Nigeria. )

The earliest use of the image found by AFP was from a Twitter user based in Angola, @Paidalindahotm1. On March 11, 2018 he posted the image to Twitter, with the message in Portuguese reading: “Leão angolano foi morto.” (Angolan lion is dead.) 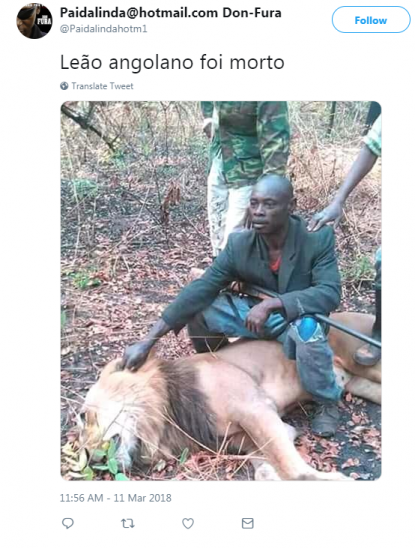 (A screenshot taken on Thursday December 13, 2018, of a picture posted on Twitter showing a lion allegedly killed in Angola.)

The post was a reply to an earlier tweet which appeared to be a picture of himself. The two photos appear to show the same man, suggesting he was the person who killed the lion.

This same image was also shared on social media in August in a Facebook group with 12,000 followers called SansTabou-Guinea. In that post it was claimed it came from Guinea.

According to research experts on conservation in West Africa, only two areas in Nigeria are home to lions: Kainji Lake National Park, in the northwest, where some 30 big cats were thought to be living, and Yankari Game Reserve in Bauchi state, northeast Nigeria, where researchers believe there are less than five lions.