No, this video does not show supporters of India’s ruling party tearing down a statue of the country’s first law minister

A video that has been viewed hundreds of thousands of times on Facebook claims to show members of India’s ruling Bharatiya Janata Party tearing down a statue of Bhimrao Ambedkar, a key architect of India’s constitution. The video actually shows people razing a statue of Russian communist leader Vladimir Lenin after India’s Communist Party lost power in state elections in March, 2018.

Multiple Facebook posts, including this one which has been shared more than 28,000 times and viewed nearly 600,000 times since it was posted on 27 June, 2018, contain a video they claims shows BJP workers tearing down a statue of Bhimrao Ambedkar, India’s first law and justice minister.

The 40-second video, which has been posted on multiple accounts including this one where it has more than 6,000 shares, has a caption in Hindi saying: “BJP leaders bringing down the statue of Ambedkar, this video should be made viral so that the whole India views it.” 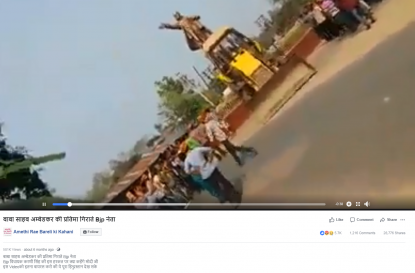 A reverse image search found that the video actually shows a March 5, 2018 incident in the small town of Belonia in the northeastern Indian state of Tripura when a statue of Russian communist leader Vladimir Lenin was pulled down.

The incident happened 48 hours after the Communist Party of India, which had ruled Tripura for 25 years, lost power to the BJP in state elections.

Indian media reported on the bulldozing of the statue, for example here in the Indian Express, and published videos showing the statue being torn down, for example this one on the Hindustan Times official YouTube page.

In the videos, a bulldozer can be seen tearing down the statue while people chant: ‘Long Live India.’

Tripura police filed a complaint against the driver of the bulldozer for destroying the statue of Lenin.

The original media coverage of the Lenin statue razing, for example this APB news report, and the footage used in the misleading Facebook post clearly show the same incident.

For example, the position of the bulldozer and statue and the bystanders in the foreground are the same. In both screenshots, a man in a grey shirt can be seen filming the incident on the left, next to a man in a bright orange shirt and hat, and a woman in a green sari with yellow blouse.

Here are screenshots side by side, with the original footage on the left and the misleading video -- which has been rotated 90 degrees for clarity of comparison -- on the right. 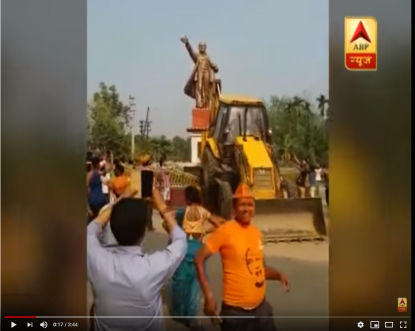 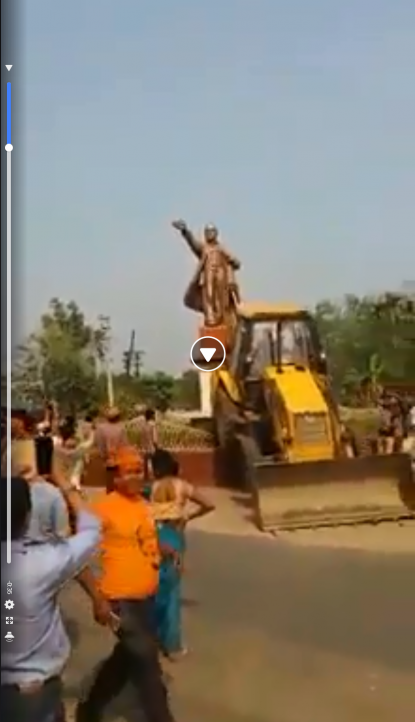