Multiple posts shared tens of thousands of times on Facebook and Twitter claim the Thai government has introduced up to 40 percent tax on sanitary pads after reclassifying them as luxury items. The claim is false; the Excise Department told AFP the claim was “false”; the director of Thailand's Tax Planning Bureau said sanitary pads were subject to seven percent VAT and that taxation for sanitary pads would not be increased.

The post’s lengthy Thai-language caption translates to English in part as: “The Prime Minister is not regulating the price of sanitary pads, having classified them as luxury items, and imposed high taxes. How much does this affect women?”

Text superimposed on the photo translates to English as: “PM categorised sanitary pad as a 'luxury item', collecting 40% tax.” 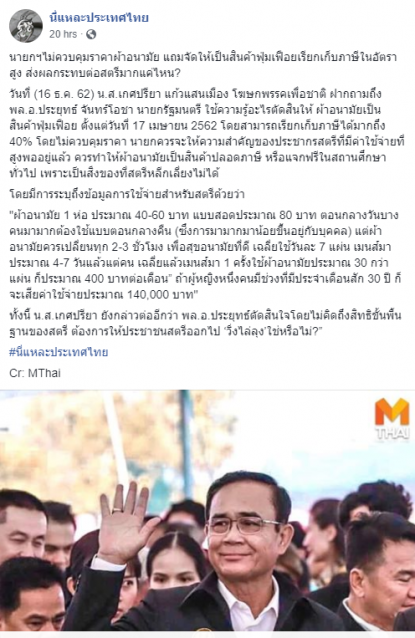 A similar claim was also published here on Facebook by Pavin Chachavalpongpun, a Thai scholar who describes himself on Facebook as an associate professor at Kyoto University's Centre for Southeast Asian Studies.

The post translates to English as: “The government’s decision to announce sanitary pads as luxury items is actually a clever strategy to encourage coconut farming on the sidelines. Women will have to switch from using sanitary pads to coconut meal. What a fascinating policy! Very feminist.”

In the past, Thai women used part of the coconut as a sanitary product, according to this report in the Bangkok Post.

Other posts with a similar claim were shared widely on Facebook and Twitter, for example here, here, here and here.

On the same day that the misleading posts were published, Kedpriya Kaewsaengmeung, spokesperson for Thailand’s opposition Pheu Chat Party, claimed the Prime Minister had imposed a luxury tax of up to 40 percent on sanitary towels, according to this report by Thai broadcaster PBS.

The claim is false; the Thai government released an official statement on December 16, 2019, stating the claim circulating on social media was untrue.

Below is the screenshot of the Thai government’s release: 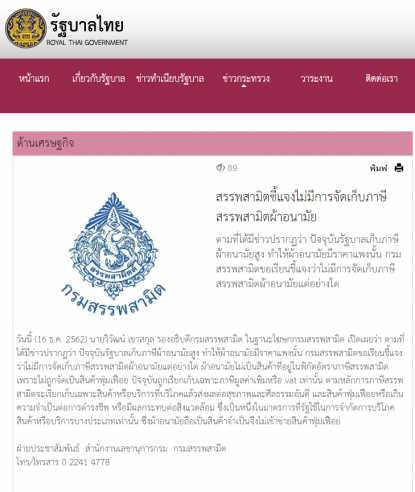 The screenshot of the Thai government’s release

The report translates to English in part: “Clarification, No Excise Tax on Sanitary Pads.

“Regarding the news report that claims the government has implemented a tax hike on sanitary pads, causing the products to become more expensive, the Excise Department would like to clarify that there is no excise tax imposed on sanitary pads in any way.

“Sanitary pads are not a product in the excise duty rate, because it is not considered to be a luxury item. Currently, only VAT is charged”.

Under the current tax scheme, sanitary pads are filed under the “control goods” category, among other 45 regulated products, including medicines, rice, and washing detergent. Here is a list of regulated products published by Thailand’s Government Gazette on July 4, 2019.

Part of the statement translates to English as: “‘Control goods’ are products that fluctuate in value depending on the economy. Hence; there is a need for price control in order to prevent unfair trade practices.”

"Confirmed, the Excise Depart does not tax sanitary pads as a luxury product up to 40% because it is a basic need for women. Sanitary pads are not categorised in the excise duty rate, only VAT is charged just like any other product," the tweet said.

Nutthakorn Utensute, Director of the Tax Planning Bureau for Thailand’s Excise Department told AFP by phone on December 18, 2019: “Controlled goods are essential products for a person’s basic needs and they are regulated by the Department of Internal Trade.

“Sanitary pads are classified under this category as it is an essential item for women.

“Luxury goods such as soft drinks and perfumes, are products that are non-essential to a person’s basic needs.

“There is no way sanitary pads can be considered as luxury goods, and I don’t see any possibility in which an additional tax would be imposed on sanitary pads.”