A video has been viewed tens of thousands of times in multiple posts on Facebook, Twitter and YouTube alongside a claim it shows a Muslim man damaging a public bus in India while protesting a contentious citizenship law passed in the country in December 2019. The claim is false; the video has circulated online since at least 2017 in reports about a man who threw a brick at a bus after it hit a pedestrian in Gujarat, a state in west India.

The video was shared on Twitter here on December 16 by British media personality Katie Hopkins. The tweet has been liked more than 25,700 times and retweeted 12,600 times.

The video was removed by Twitter, but a Google cached version of the tweet can be viewed here. Below is a screenshot of the tweet and the video: The 10-second video was also published in a Facebook post here on December 17 alongside a similar claim.

The post’s Hindi caption translates to English as: “This Muslim uncle giving his invaluable contribution in nation-building #CAA #CAB #NRC.”

The NRC acronym in the post’s caption refers to the National Register of Citizens, a citizenship registry recently implemented in the northeastern state of Assam. The registry was criticised for potentially stripping the region’s large Muslim minority of citizenship, AFP reported here. 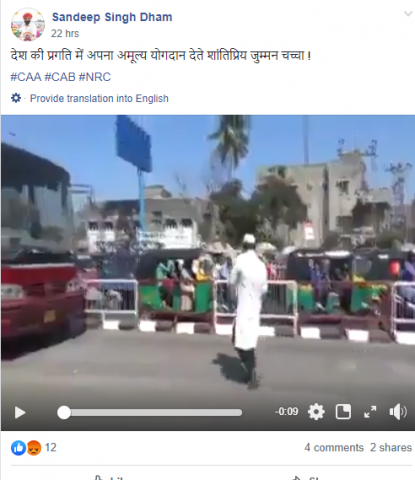 The claim is false; the video has circulated online since at least January 2017 in reports about a man who protested after a bus hit a pedestrian in west India.

A Yandex reverse image search of keyframes extracted from the video with InVid, a digital verification tool, found the clip included in a longer video published here on January 28, 2017, by Gujurat-based newspaper Divya Bhaskar.

The report states the incident happened in the city of Surat in the west Indian state of Gujarat.

The video in the misleading posts corresponds with the Divya Bhaskar video from the 16-second mark to the 26-second mark.

Below is a screenshot comparison of the video in the misleading posts (L) and the video published by Divya Bhaskar (R): 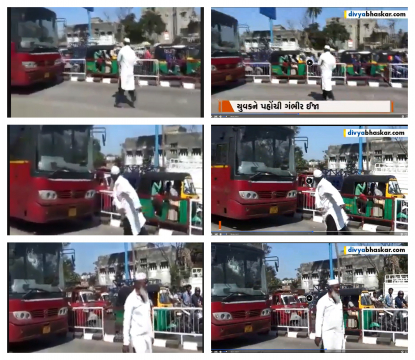 Part of the video was also published here on YouTube by Gujarati media outlet News4india.

The video in the misleading posts corresponds with the YouTube video between the 26-second and 29-second mark.

The Gujarati-language title of the video translates to English as: “Surat: Accident on Udhna BRTS road as bus hits a pedestrian.”

The caption and audio of the news report translate to English as: “A man got injured in an accident at BRTS road in Surat. The injured man was hospitalized by 108 Emergency service vehicle. Nearby residents gathered and in a reaction pelted stones on BRTS bus. Police arrived at the spot and detained the bus driver.”

The Times of India, a national newspaper, reported the incident here on January 29, 2017. “Irate people pelted stones at a BRTS bus and damaged its glasses in Udhana soon after the accident,” the article reads.