Numerous social media posts have shared two photos alongside claims that they show a rare polka-dot zebra foal, recently spotted in Kenya’s Maasai Mara National Reserve, being transported for sale abroad. The baby zebra, named Tira, had proved a hit online and claims that she had been sold met with dismay from Kenyan social media users. But an online tip-off and some expert help have allowed us to confirm that these pictures show a different zebra altogether. Kenyan wildlife authorities say rumours of a sale are “completely false”.

Tira was spotted in the Maasai Mara in mid-September, to the delight of the national and international media. AFP recorded a video of the foal, which was named after the owner of the bushcamp where it was spotted.

The unique dot pattern could increase the foal's vulnerability. Zebra stripes provide camouflage from colour-blind predators - the lines blur with movement and individuals don’t stand out in groups pic.twitter.com/QOy8YvnCmi

Last week, rumours began spreading that the polka-dot zebra had been captured, placed in a truck and transported out of the Mara to be sold. One post on a private Kenyan Facebook group shared a screenshot of the claim to its more than 100,000 followers. 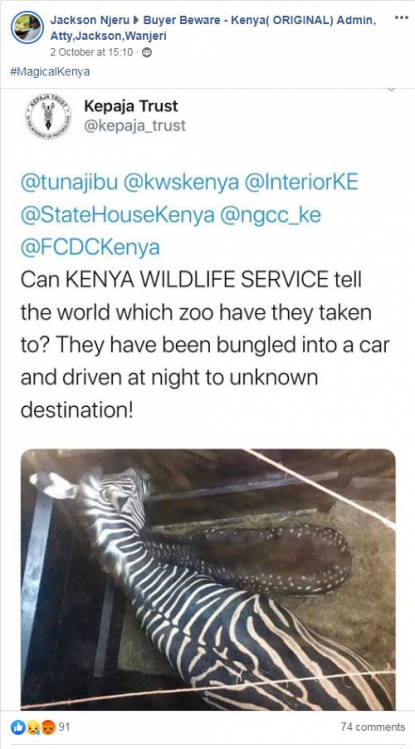 A screenshot of one of the misleading Facebook posts, taken on October 9, 2019

This tweet -- using another name given to the animal by some social media users, “Debra” -- claimed the polka-dot foal was being moved to an unknown destination. The post was retweeted over 250 times and gained more than 650 likes. 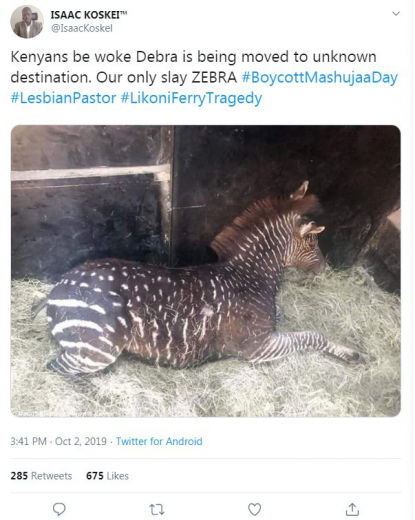 This tweet similarly claimed the zebra was being moved

The same claims and images were posted here on Facebook and on Jamii Forum, a Tanzania-based message board. This tweet claimed the foal had been sold to “a certain Western Country”.

The zebra in the pictures is from South Africa, not Kenya

We ran a Google reverse image search to try to find the original source of the two images circulating alongside the rumours, but this didn’t provide any leads.

However, scrolling through comments under one of the posts, we spotted a link to a Facebook post by Craig View, a veterinary clinic in South Africa. 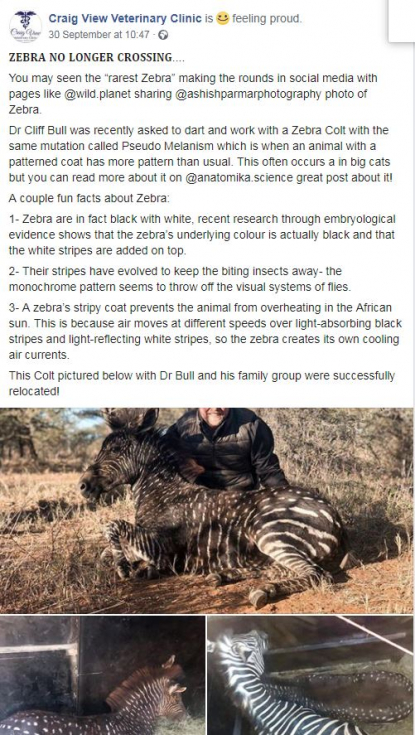 The post included the images that have been circulating alongside the rumours about Tira, plus an extra one of a man posing with the animal. The post identified the man as Clifford Bull, the clinic owner. He’s recognisable in other social media posts and news articles about wildlife in South Africa.

Dr Bull told us he had shared the pictures on September 30 after headlines appeared about the Kenyan foal, to show that Tira was not the only animal of its kind. The photos began circulating alongside the rumours a couple of days later, but he confirmed that the two are unconnected.

“It is not the same zebra,” he told AFP in an email. “If one compares the markings on the two zebra it’s evident that the two animals are different.”

Each zebra, he explained, “has different stripe patterns, much like human fingerprints. This serves two purposes: when the young are born they can imprint on their mothers, which allows them to recognize and stay with their mothers in the herd. It also serves as a mechanism that confuses predators.”

The zebra pictured with him is a colt, a young male.

Dr Bull added that both of these spotted zebras are vulnerable since their markings make them stand out, making them more easily seen by predators.

This sadly makes it “a slim possibility that they will reach adulthood and have offspring of their own,” he said.

How to tell the two zebras apart

Justine Cordingley, a researcher at Grevy’s Zebra Trust, an independent wildlife conservation Trust in Kenya, helped us distinguish the two animals by examining their markings.

Comparing the two, you can see that the foal in the Mara has a darker back and more spots on its belly and back leg than the one in the truck. Its neck is also spotty rather than stripey. The one in the truck also has very stripey legs. 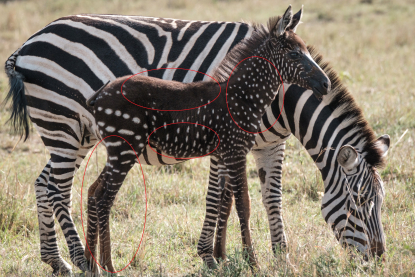 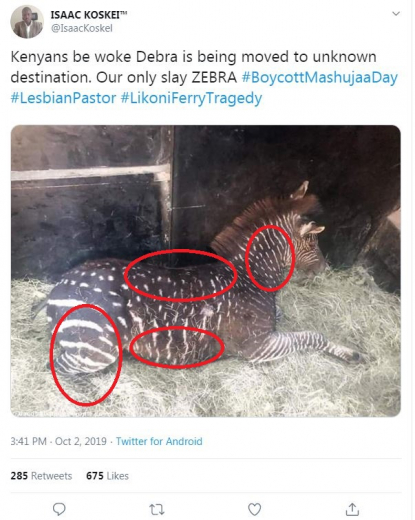 Dr Bull encountered the South African zebra colt at a small private game farm in the Mookgopong area of Limpopo province in July, and he estimates it to be between 10 and 12 months old.

Tira is a lot younger. “The umbilical cord was still very fresh by the time I spotted it on Matira Bushcamp located in the Masaai Mara,” said tour guide Jonathan Tira, who first saw the foal on September 13. “From my analysis, it could have been born two days before I spotted it,” he told AFP by telephone.

Where is Tira now?

Ngugi Gecaga, communications officer at the Kenya Wildlife Service (KWS), said there was no truth at all to rumours that Tira had been sold abroad.

“There is no animal being sold, the claims are completely false,” Gecaga told AFP in a phone interview.

He added that the KWS rejected calls to put the foal under special protection because its spots make it more vulnerable than other zebras.

“KWS operates on the premise that animals should be in the wild. The zebra is not a special species, it is just a freak of nature -- similar to the albino zebra that we recently had. It won't be fair to isolate the animal and from a conservation point of view that would inhumane,” Gecaga said.

“The zebras protect each other and it will be protected by its own. If a predator spots it and preys on it, it will be just the course of nature.”

Tira’s current whereabouts are not known.

However, French wildlife photographer Tony Crocetta wrote in a Facebook post on September 29 that he had seen the spotted zebra crossing the Sand River, which separates Kenya’s Maasai Mara National and Tanzania’s Serengeti Park.

“The probability of coming across Tira again one day is sadly close to zero,” he wrote. “But I still believe in miracles.”