A video has been viewed more than half a million times in multiple Facebook posts published in September 2019 alongside a claim that it shows Indian soldiers torturing Muslim women in Indian-administered Kashmir. The claim is false; the video shows a Pakistani police officer hitting several women outside a court in Multan, Pakistan, in June 2019.

The video shows a uniformed man hitting the back of a woman's head and slapping another in the face. 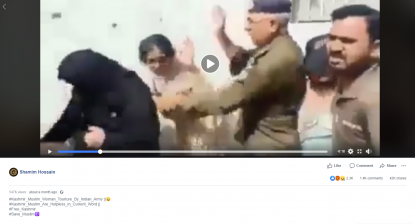 The misleading video was also published here and here on Facebook alongside a similar claim.

The claim is false; the video was previously published in news reports about a Pakistani police officer hitting several women outside a court in Multan, a city in Pakistan's Punjab province.

A reverse image search on Google based on a keyframe extracted from the video found the footage in the misleading posts included in this video published to YouTube on June 27, 2019.

Below is a screenshot comparison of keyframes from the video in the misleading posts (L) and the YouTube video (R): 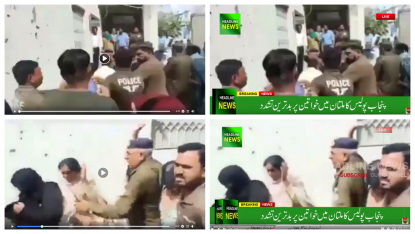 A journalist in AFP’s Delhi bureau subsequently examined the video in the misleading posts and found a Pakistani flag patch on the uniform of a man, seen at the 10-second mark of the video.

Below is a screenshot comparison of the flag patch circled in red by AFP (L) and an AFP photo of the flag of Pakistan (R):

The incident was reported here in an Urdu-language report by Pakistani newspaper the Daily Jang on June 27, 2019.

The report’s headline translates to English as: "The police officer who used violence against women at district court has been summoned".

The Daily Jang said the Chehliyak police officer "tortured" and used violence against the women in an attempt to remove them from their shops, which were located near the district court in Multan.

The video in the misleading posts corresponds with images of the court published on the court’s website, for example here and here.