Sun image was shot by an astrophotographer, not NASA solar probe — and it is not the closest ever

An image has been shared thousands of times on social media with claims that it shows “the closest image of the Sun”, captured by US space agency NASA’s Parker Solar Probe. The claims are false: the photo was actually taken from Earth by an independent astrophotographer and it is not the closest-ever shot of the Sun.

The photo has been circulating in multiple posts on social media, including on this Facebook page where it has been shared more than 2,500 times since February 3, 2021.

“The closest image of the Sun, captured by the Parker Solar Probe, from 6 million Kilometres away,” the post’s caption reads.

The image shows a close-up of a glowing orb.

Similar claims have appeared with the photo in social media posts in Nigeria, Bangladesh, Egypt and Pakistan, according to data from the social media monitoring tool CrowdTangle.

However, the picture wasn’t taken by the Parker Solar Probe and while it does depict the Sun, it is not the closest-ever image on record.

Parker Solar Probe was launched in August 2018 as NASA’s first special mission to get close to the Sun. The agency hopes that the car-sized probe will allow a better understanding of the solar wind and electromagnetic storms which can cause chaos on Earth by knocking out power grids.

NASA released an image showing the surroundings of the Sun, taken by the Parker Solar Probe on November 8, 2018, at about 27 million kilometres (16.9 million miles) from its surface — a different shot to the one in the Facebook posts. 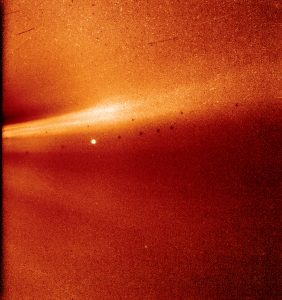 A Parker Solar Probe’s image of the Sun

AFP reported last year that the mission had sent back a “spectacular trove” of data on the Sun’s corona — the super-hot outer edge of its atmosphere —  after surviving its closest encounter then with the solar body.

A Google reverse image search led to this online report published on December 3, 2020, by Sudanese-based news site Shno News. The article features recent images of the sun,  including the viral picture credited to “astrophotographer” Bray Falls.

AFP Fact Check found the original photo was published a few days earlier on November 30, 2020, by Falls on his Instagram account.  Falls is an aerospace engineering student at Arizona State University and works for US-based Honeywell Aerospace.

“A pretty rare sight occurred yesterday on the sun. An interesting prominence began to form on the limb, zoom into the top part to see it,” reads the caption on his Instagram post.

“[...] The plasma in the prominence closely follows the magnetic field lines, creating loops instead of the normal firey shape.”

“I took that photo from my backyard,” Falls wrote in an Instagram message.

In August 2020, US broadcaster CNN interviewed Falls about his photography and described his Instagram account – showcasing spectacular pictures of the cosmos – as “one of the coolest … we’ve ever seen”.

Falls also shared additional images he took of the Sun on Twitter on November 27, 2020. “Our sun from yesterday. She’s starting to get way more active,” the tweet reads.

Acknowledging the false claims, Falls recently tweeted a screenshot of the Facebook post misattributing his image and jokingly wrote, “Hello I am the Parker Solar Probe now.”

Not the closest shot of the Sun

Credit for the closest snap of the Sun belongs to the US National Science Foundation’s Inouye Solar Telescope located on the island of Maui. The facility released “unprecedented close-ups of the sun’s surface” in January 2020, showing a pattern of turbulent, “boiling” gas around the Sun.

The NSF's Inouye Solar Telescope provides unprecedented close-ups of the sun’s surface, but ultimately it will measure the sun’s corona – no total solar eclipse required. 😎

“NSF’s Inouye Solar Telescope is able to map magnetic fields within the sun’s corona, where solar eruptions occur that can impact life on Earth,” NSF Director France Cordova said in a statement. “This telescope improves our understanding of what drives space weather and ultimately help forecasters better predict solar storms.”

AFP Fact Check debunked a similar claim involving NASA and an image of the Sun here.