The Pakistani mountaineer remains missing and the search is still ongoing

Multiple posts on Facebook and videos on YouTube claim that famous Pakistani mountaineer Ali Sadpara has been found alive after he was reported missing on February 5, 2021. The claim is false: Sadpara and his group of mountaineers went missing scaling Pakistan's K2 mountain and have not been found as of  February 16, 2021. Pakistan's search and rescue operation is ongoing.

The claim was posted here on Facebook on February 14, 2021 with a photo showing Ali Sadpara with Major General Dr. Ehsan Mehmood Khan of the Pakistani army.

The Urdu-language caption translates to English as: “The world’s biggest operation is successful. Thank God. The biggest news that Pakistani army has announced Muhammad Ali Sadpara is alive after 216 hours, the world’s biggest record. Greater Pakistan.”

Muhammad Ali Sadpara was part of the team that completed the first ever winter ascent of Nanga Parbat and is the only Pakistani to have climbed 8 of the fourteen 8,000-metre peaks in the world, as reported by Pakistani media outlet Dawn News.

On February 5, 2021, Ali Sadpara’s team of climbers lost contact with their base camp while attempting to climb the world’s second-highest mountain, K2, AFP reported here.

The K2 mountain is located in northern Pakistan in the Karakoram range which spans the border between Pakistan and China.

Separately, a video posted here on YouTube on February 12, 2021, which has been viewed more than 100,000 times, also claims that Ali Sadpara has been found through satellite imagery.

The Urdu-language narration at the start of the video translates to English as: “Hello viewers and welcome to Historical Facts’ new video. Ireland has found Ali Sadpara. He’s been identified in satellite imagery. Pakistani Air Force's C130 ready for rescue mission, now what are we waiting for? Big operation by Pakistani Army and Pakistani Air Force. Made the unachievable achievable. Whole country is filled with happiness.” 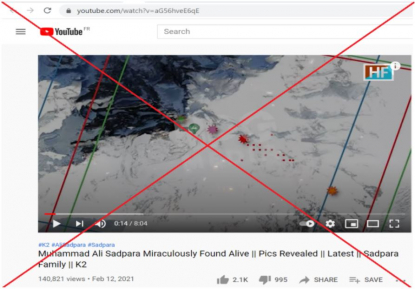 Screenshot of video with the false claim on YouTube, taken on 16 February 2021.

Ali Sadpara’s social media team said on Twitter on February 15, 2021 as part of a thread: “The government and other stakeholders are still putting their best efforts to find our missing climbers. A meeting of apex committee regarding SAR [Search And Rescue] will be held on 17th Feb. in Gilgit. Please avoid any premature statements and keep away from fake reports. Management”.

We're sorry for the lack of updates on Ali Sadpara official social media. As Ali's mangmnt we've been too focused on the rescue efforts of past days to pay attention to anything else. We have been both inundated by love and support, but also by fake news that distressed us all.

A reverse image search on Google found the photo seen in the Facebook posts was posted here by local travel agency Alpine Adventure Guides’ Twitter account in March 2019 when Ali Sadpara climbed the Makalu mountain, the 5th tallest mountain in the world.

According to a February 15, 2021 report from Dawn News, some tents and sleeping bags were located through satellite imagery, however, it transpired that they did not belong to Ali Sadpara and his group of climbers.