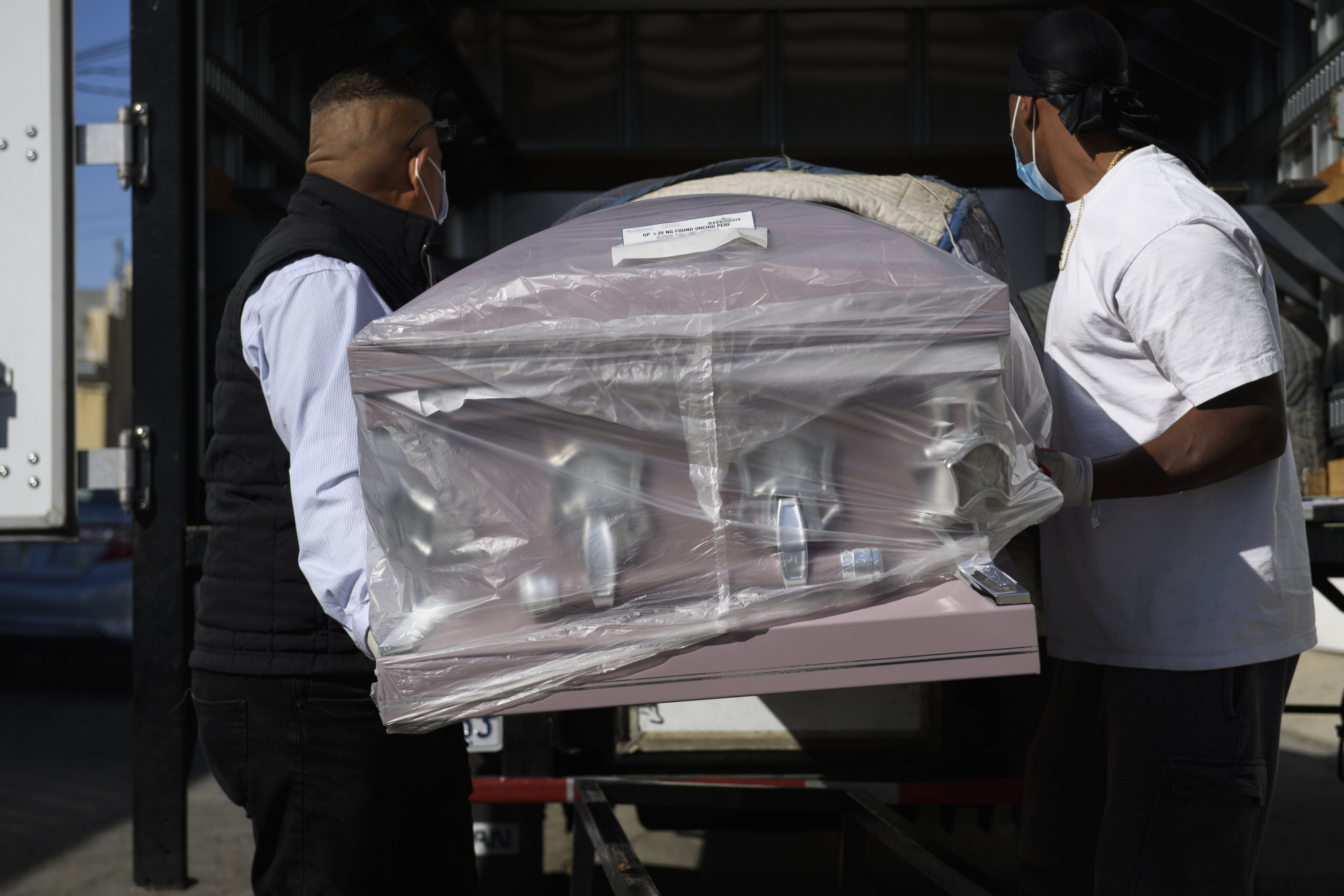 An empty casket is delivered amid a surge of Covid-19 deaths to the Continental Funeral Home on December 31, 2020 in East Los Angeles, California. (AFP / Patrick T. Fallon)

Multiple Facebook posts shared by Sri Lankan social media users in January 2021 claim that California's Los Angeles County suspended cremations for people who have died after contracting Covid-19. The posts circulated online after the Sri Lankan government faced criticism for mandating cremations for Covid-19 fatalities, rejecting calls to allow the Muslim minority to bury their dead in line with Islamic custom. The claim is misleading: the posts refer to a CNN article that accurately stated a cremation limit in Los Angeles County was in fact temporarily suspended due to a "backlog" of bodies. 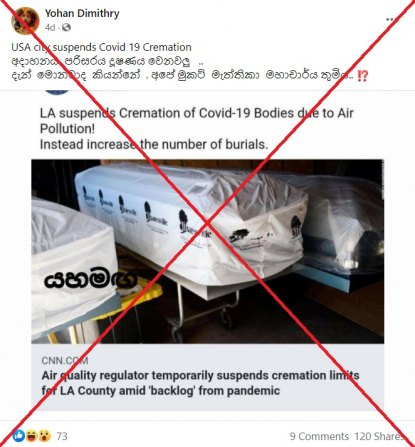 The post included a screenshot of a post with English text that reads: “LA suspends cremation of Covid-19 bodies due to Air Pollution! Instead increase the number of burials”.

"Environmental pollution due to cremation..

"What will you say now, Professor Meththika..!?"

Professor Meththika Vithanage is a Sri Lankan academic who has expressed support for the Sri Lankan government's policy on mandatory cremations of Covid-19 fatalities, citing concerns that cemeteries can be a source of pollution in the island nation. Her comments were reported here by Sri Lankan newspaper The Sunday Morning.

Since April 2020, the Sri Lankan government has followed a policy of mandatory cremations for Covid-19 fatalities. In early January 2021, the government again insisted on the cremation of all coronavirus victims, rejecting international pleas and recommendations from its own experts to allow the Muslim minority to bury their dead in line with Islamic custom, as AFP reported here.

Similar posts have been circulating among Sri Lankan users as seen here, here and here since at least January 20, 2021, which claim a “USA city” has suspended cremation of Covid-19 fatalities due to air pollution.

The posts referred to this CNN article published on January 18, 2021.   The article accurately notes that a limit on the number of cremations in Los Angeles County was temporarily suspended due to the "backlog" of bodies during the pandemic. A screenshot of the CNN article captured on January 24, 2021

The article's first three paragraphs read: “As Los Angeles County battles against the unrelenting coronavirus, an air pollution control agency says it has temporarily suspended limits on cremations in order to assist crematoriums in the county with a "backlog" caused by the pandemic.

"The South Coast Air Quality Management District said in a news release Sunday that permits for crematoriums usually contain limits on the number of human remains that can be cremated each month, based on the potential impact they will have on air quality.

"But after requests from both the county coroner and health department, the agency issued an emergency order suspending permit conditions that limit the number of cremations, as long as crematoriums submit an email notice and meet certain requirements.”

The South Coast Air Quality Management District, a government agency which is responsible for regulating air pollution in Southern California, published the order about the suspension of cremation limits here on its website.

The story was also reported here by HuffPost and here by CBS News on January 18, 2021.