A tweet shared tens of thousands of times on social media claims President Joe Biden’s executive orders caused a fall in soybean and corn prices. This is misleading; Biden focused his initial actions on the coronavirus pandemic and priorities outside the agricultural sector, while analysts said the markets were due for a selloff and not linked to a particular decision from the new administration.

The claim circulated on Facebook, here, here and here.

The post did not specify which orders it was referring to, but the ones signed up to that day mostly focused on the coronavirus pandemic. By January 22, 11 out of 19 executive orders endorsed by Joe Biden concentrated on the health crisis and its fallout, according to the Federal Register.

An executive order signed on January 22 launched an economic relief effort that addresses, in part, “the growing hunger crisis” in America and asks the “US Department of Agriculture to consider expanding and extending federal nutrition assistance programs.”

Soybean and corn prices declined steeply on January 22. But even after their recent drop, they are still very high compared to prices in the last five years. Prices per bushel picked up again on January 25 and 26, benefitting from a large export order of corn from China and less favorable soy harvest conditions in Brazil, according to an AFP report in French. 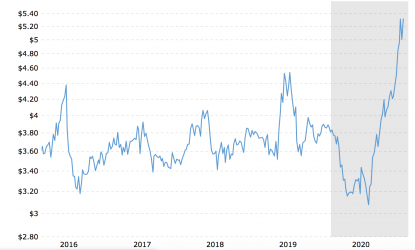 A screenshot of a Macrotrends.net chart showing corn prices in US dollars per bushel in the last five years taken on January 27, 2021 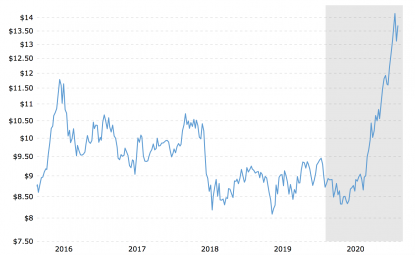 A screenshot of a Macrotrends.net chart showing soybean prices in US dollars per bushel in the last five years taken on January 27, 2021

Matthew Bennett, commodity analyst at AgMarket.net told AFP by phone that “the market dropped with no major reason.”

“There was a lot of profit-taking and a lot of selling on Friday for both corn and beans that were not necessarily related to any major news,” Bennett added.

Jack Scoville, market analyst with The Price Futures Group, agreed that “the market had reached a point where it got overbought.” He added that prices are still “very high” and the soybean situation remains “very bullish.”

Jamie Wasemiller, a market analyst at Gulke Group, a consultancy specializing in agribusiness, explained to AFP that “technically, the market needed to take a break” and that it “moved within ranges that made sense.”

He added there was no clear connection with Biden’s presidential actions. “I’d fully disregard that statement that says there was directly a link to those executive orders,” he said.