Some viral diseases listed in this post were first reported elsewhere in the world, studies show

Multiple posts shared hundreds of times on Facebook purport to show a list of notable viral outbreaks between 1950 and 2019 which “originated in China”. The claim is misleading; some of the viral diseases listed in the posts were first reported elsewhere in the world.

It features an illustration of Chinese President Xi Jinping looking down at coffins draped with the flags of multiple countries; including the US, the UK, Australia and Germany.

The text underneath states: 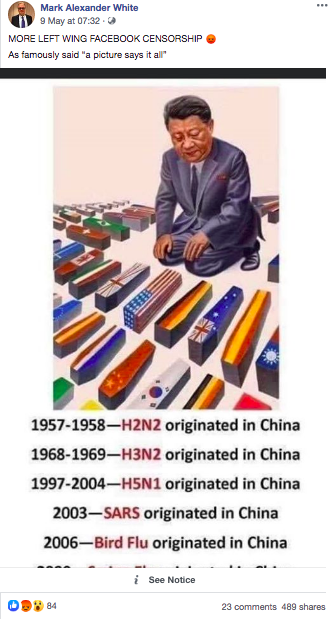 A screenshot taken on May 19, 2020, of the misleading post by Mark Alexander White

The claim was also shared alongside the same image hundreds of times by other Australia-based Facebook users here, here, here and here.

Some of the viral outbreaks listed in the misleading posts, however, were first reported outside of China.

According to the US Centers for Disease Control and Prevention (CDC), the influenza viruses H2N2 and H3N2 were first reported in Singapore in 1957 and in the United States in 1968 respectively.

Swine flu, which is caused by H1N1 influenza virus, was first reported in humans in the US in 2009, the CDC states in this fact sheet. The agency added here that up to 575,400 people worldwide died from the disease during the first year of the outbreak.

Porcine pestivirus, an animal virus officially known as Atypical Porcine Pestivirus (APPV), was first detected among piglets in Austria in 2013, according to academic studies here and here. The virus has since spread across Europe, Asia and North and South America.

Pestivirus can infect swine, cattle, sheep, goats, and other domestic and wild animals. A 2019 study published in Frontiers of Veterinary Science, a peer-reviewed medical journal, also found that APPV has been one of the “several putative pestiviruses species found in mammalian species” in recent years.

COVID-19, a disease caused by the novel coronavirus, was first reported in the Chinese city of Wuhan in December 2019, according to the World Health Organization (WHO).

SARS, which stands for severe acute respiratory syndrome, is a “viral respiratory illness caused by a coronavirus called SARS-associated coronavirus (SARS-CoV)” that was first detected in the southern Chinese province of Guangdong in 2002.

As of December 31, 2003, the WHO recorded a total of 774 deaths after SARS spread to North America, Australia, New Zealand and elsewhere in the world.

The H5N1 virus, which causes a “highly infectious, severe respiratory disease in birds” and is also known as the “bird flu”, was first reported in a goose in China’s Guangdong province in 1996, according to the WHO. The first case of a H5N1 human infection was reported in Hong Kong in 1997.

The virus re-emerged in 2003 and 2006 and has since been spread across Asia, Europe and Africa by migrating birds, according to the CDC and a 2006 study published by the peer-reviewed American Academy of Family Physicians.