Skip to main content
A restorer works on a petrified victim of the eruption of Mount Vesuvius in 79 BC, as part of the restoration work and the study of 86 casts in the laboratory of Pompeii Archaeological Site in Pompeii, Italy, on May 20, 2015. (AFP / Mario Laporta)

An image of a man’s remains at the volcanic eruption site of  Mount Vesuvius in Pompeii, Italy, has been shared repeatedly in multiple posts on Facebook and Twitter that claim he was killed by a stone during the volcanic explosion in 79 BC. The claim is misleading. While the preliminary hypothesis was that the man was killed by a large stone, archeologists later said that he likely died due to asphyxiation. Some of the misleading posts shared an old story from the CNN website, which the US broadcaster later clarified in an updated report.

The image was published here on Facebook on November 16, 2020.

The image shows human remains under a slab of stone. The post appears to have been taken from a tweet by CNN, which was originally published in May 2018.

The tweet reads in part: “Archaeologists working at the ancient Roman city of Pompeii, Italy, uncovered the remains of a 30-year-old man who appears to have survived the initial eruption of Vesuvius in 79 A.D., only to be killed when he was struck by a large slab of stone.” 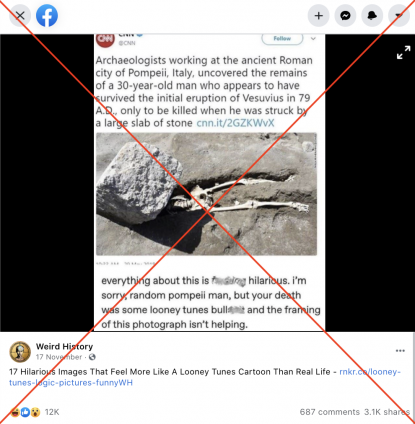 It was also shared here and here on Twitter alongside a similar claim.

In a press release published on the Archeological Park of Pompeii’s website, the preliminary hypothesis was that the man had been crushed by the stone, given that the upper part of the thorax and the skull of the body had not been discovered in Regio V, a Pompeii excavation site.

“This preliminary hypothesis arose from the observation of the position of the boulder compared to the empty space of the body impressed into the cinerite,” the press release reads.

Those upper parts of the body were later found, leading investigators to conclude that the man had died by asphyxiation from the pyroclastic flow -- the masses of hot rock fragments, gases and air which move rapidly following a volcanic explosion.

The press release goes on: “His death was presumably not, therefore, due to the impact of the stone block, as initially assumed, but likely to asphyxia caused by the pyroclastic flow.

“The identified skeletal remains consist of the upper part of the thorax, the upper limbs, the skull and jaw. Currently undergoing analysis, they display some fractures, the nature of which will be identified, so as to be able to reconstruct the final moments in the life of the man with greater accuracy.”

In an update, this article published by CNN on July 1, 2018, reported on the new findings, clarifying that the Pompeii victim was not crushed by a stone block.

The new findings were also reported by Italian news agency ANSA on June 28, 2018.