Skip to main content
US Senate Majority Leader Mitch McConnell, Republican of Kentucky, walks to his office from the Senate Floor at the US Capitol in Washington, DC on December 18, 2020. (AFP / Saul Loeb)

A video has been viewed tens of thousands of times in multiple posts on Twitter and Facebook that claim it shows a protester berating US senator Mitch McConnell at a restaurant after he recognised Biden as president-elect in December 2020. The claim is misleading; the video has circulated in multiple media reports since October 2018.

The video was published here on Twitter on December 17, 2020. 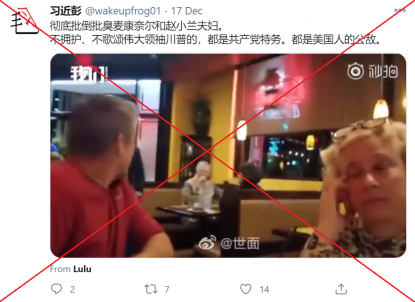 The post’s caption, written in simplified Chinese characters, translates to English as: “Down with the stinky McConnell and his wife Elaine Chao. / Those who do not support or praise the great leader Trump are all Communist spies and public enemies of the US nationals.”

Mitch McConnell is a Senate Majority Leader of the United States and husband of Elaine Chao, the Secretary of Transportation of the US.

McConnell acknowledged Biden’s victory on December 15, 2020 in the 2020 US presidential election, as reported here by AFP.

The video was also viewed tens of thousands of times here, here and here on Twitter, and on Facebook here and here alongside a similar claim.

But the video was shared in a misleading context.

A keyword search on Weibo found the same footage as the Twitter video published by We Video, a video channel of Chinese state-owned newspaper Beijing News. The dateline is October 23, 2018. 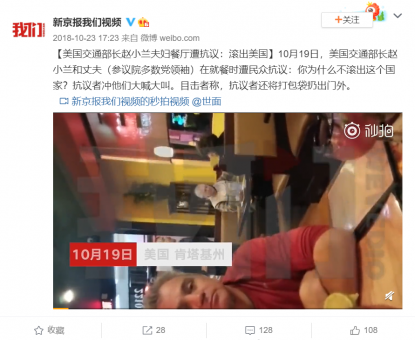 Screenshot taken on December 22, 2020, of the Weibo footage published by We Video

Below are two screenshot comparisons between the Twitter video (L) and the footage published by We Video (R): 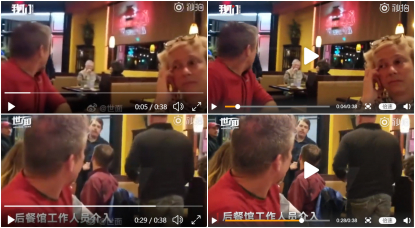 The Weibo video’s caption, also in simplified Chinese characters, translates partly as: “[US Transportation Secretary Elaine Chao and husband confronted in restaurant: Get out of the United States] On October 19, the US Transportation Secretary Elain Chao and her husband (Senate Majority Leader) were confronted during a meal: Why don’t you leave our entire country? The protester yelled at them.”

The 2018 confrontation with images of the same scene was also reported by media outlets such as here by HK newspaper Wen Wei Po; here by Chinese state newspaper Reference News; here by US television broadcaster CNN; and by US newspaper The Hill here.