A photo has been shared hundreds of times in multiple posts on Facebook and Twitter, along with a claim that it shows a jailed Pakistani opposition party lawmaker sleeping on the floor of his cell. Some posts shared the image alongside an image of the handcuffed lawmaker being escorted by a police officer. The claim is false; the photo has circulated in reports since 2008 about a person sleeping rough on a street in Australia. 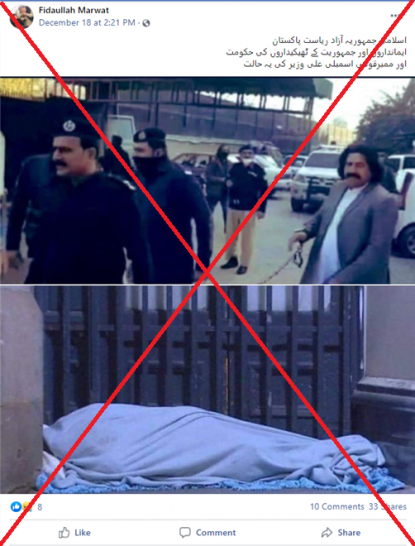 A screenshot of the misleading post, taken on December 22, 2020

The post’s Urdu-language caption translates as: “Islamic Republic of Free State Pakistan. Government of honests and contractors of democracy and this is the condition of Member National Assembly Ali Wazir.”

The image was shared alongside another image of opposition lawmaker Ali Wazir in handcuffs.

Wazir was arrested on December 16, 2020, in the northwestern city of Peshawar for allegedly making “derogatory remarks against state institutions” and “hatching a criminal conspiracy”, Pakistani newspaper Dawn reported here.

The first photo showing Wazir being escorted by a police officer was published in The Pakistan Daily here on December 18, 2020.

The photo has been shared more than 950 times after it was also published alongside a similar claim on Facebook here and here; and on Twitter here, here and here.

Below is a screenshot comparison of the photo on the ABC website (L) and the photo shared in the misleading post (R) – AFP has marked the corresponding features in red: 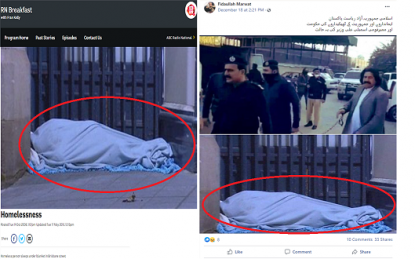 The image was published again in ABC reports about homelessness in Australia in here in March 2018 and here in April 2020.