Skip to main content
Volunteers from a non-governmental organisation (NGO) hold placards during a protest in New Delhi on October 11, 2020 to condemn the alleged gang-rape and murder of a teenaged woman in Bool Garhi village at Hathras in Uttar Pradesh state. (Photo by Sajjad HUSSAIN / AFP) (AFP / Sajjad Hussain)

A graphic photo of a dead woman’s body has been shared thousands of times in multiple Facebook and Twitter posts in October 2020 alongside a claim that it shows a 13-year old Hindu girl who was burnt alive after being raped by a Muslim man in the west Indian state of Rajasthan. The claim, however, is false: local police in Rajasthan said no such incident had occurred in their jurisdiction; the image has been linked online to an unrelated incident in the central Indian state of Madhya Pradesh, which police said did not have a religious motive.

The photo was published here on Facebook on October 2, 2020. 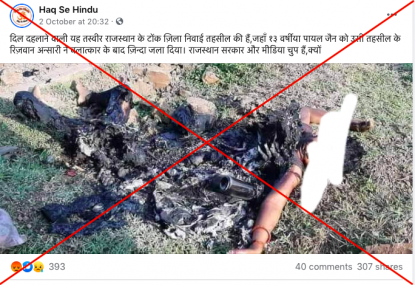 The post’s Hindi-language caption translates to English as: “Heart-wrenching photo from Rajasthan's Tonk district, where 13-year old Hindu girl Payal Jain was raped and then burnt alive by a Muslim man Rizwan Ansari who lives in the same district. Why is the Rajasthan government and media silent?”

Tonk is a town in the west Indian state of Rajasthan.

In response to the misleading posts, a spokesperson for Tonk Police posted here on Twitter on October 3, 2020, saying there had been “no such incident” reported in their district.

The Hindi-language post translates to English as, “No such incident has been reported in Tonk, the photo is not from Tonk. Police are taking action against those who are spreading these rumours.”

A reverse image search on Google found several users posting a similar image on Twitter on October 1, 2020, alongside a claim that the photo relates to an incident in a town in central India.

According to those media reports, the incident happened in Gandhwani village in the central Indian state of Madhya Pradesh on September 29, 2020.

“The woman was murdered and her body was burnt by her boyfriend Govind and one of his friends, Sohan. Govind is absconding while we have managed to arrest Sohan. There is no communal angle,” investigating officer Aditya Pratap Singh told reporters in a video interview published by Asianetnews and SKPlivenews on October 4, 2020.

A copy of the police report was published here on the Madhya Pradesh police website.

Below is a screenshot of the relevant part of the police report: 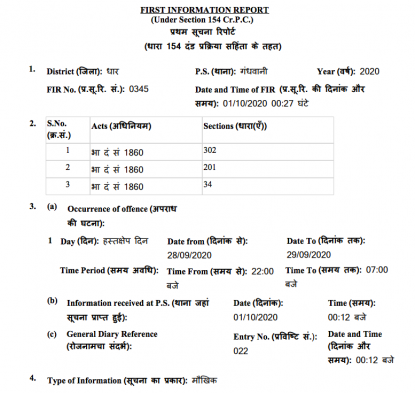 The complaint says the deceased woman was 30 years old. It states the accused has been charged under various sections of the Indian law, 302, 201 and 34; i.e. for ‘murder’, ‘causing disappearance of evidence of offense’ and ‘Acts done by several persons in furtherance of common intention’.