Skip to main content
Punjab Police personnel stand in formation during a flag hoisting ceremony on the occasion of India's 74th Independence Day, which marks the end of British colonial rule, at the Jallianwala Bagh in Amritsar on August 15, 2020. (AFP / Narinder Nanu)

Three photos showing the body of a dead policewoman and her identity card have been shared tens of thousands of times in multiple posts on Facebook, Twitter and Instagram alongside a claim that she was raped before she was killed. The claim, however, is false: according to Punjab police, the policewoman died in a road accident on October 1, 2020; the official police complaint does not mention rape or murder.

The photos were published here on Facebook on October 2, 2020. The post has been shared more than 8,200 times. 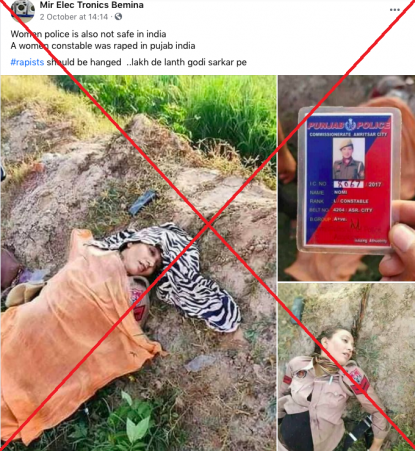 The post’s caption reads as: “Women police is also not safe in India. A woman constable was raped in Punjab, India. Rapists should be hanged. Shame on government.”

Punjab is a state in north India.

One of the photos purports to show the woman's official identification: she is named as Nomi, a constable working with Punjab police in Amritsar city.

A reverse image search on Google found several Indian news websites reporting that the incident on October 1, 2020 was a road accident. The reports were published here, here, here, and here.

A report published in local newspaper Jagran here on October 1, 2020, quoted a senior police official Ajnala Vipin Kumar, who told the publication: “Her scooter was hit by a SUV car. She died on the spot while the accused fled the spot.”

Similar photos with a misleading caption were shared here on Twitter on October 3, 2020.

In response to the misleading tweet, the Amritsar police posted a reply here on October 5, 2020. The tweet reads: “This news is false, this was an road accident. Please share with us detail of source from where you get this false information, so that appropriate action can be taken.”

The official police complaint relating to the incident was uploaded here on the Punjab police website.

Below is a screenshot of the relevant part of the police report: 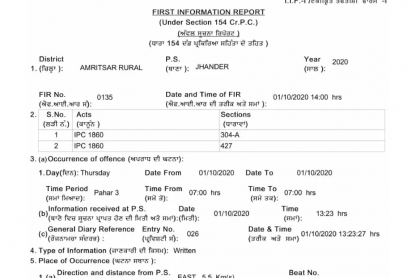 The police complaint states charged have been filed against unknown people under sections in Indian law 304-A and 427; i.e. for "Causing death by negligence’ and ‘Mischief causing damage to the amount of fifty Indian rupees".