Skip to main content
President Donald Trump and First Lady Melania Trump walk towards Marine One as they depart the White House en route to Mar-a-Lago, the President's private club, where they will spend Christmas and New Years Eve in Washington, DC on December 23, 2020. (AFP / Samuel Corum)

An image has circulated online that purports to show a screenshot of a tweet by US President Donald Trump on December 18, 2020 declaring that he has invoked martial law. The claim is false; no evidence of the tweet could be found on the US president’s Twitter account or a database of deleted tweets. Trump has since denied that he suggested invoking martial law.

The post features an image that purports to show a tweet from Donald Trump on December 18, 2020. The text in the purported tweet reads: “Under the Insurrection Act I have declared Martial Law. This was an attempted coup. Arrest are being carried out all over the nation. Biden has surrendered his passport. More to come!” 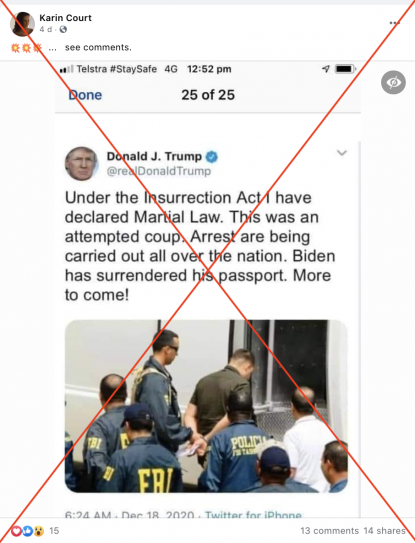 With one month to go until Joe Biden takes office, Trump remains fixated on his failed bid to overturn the 2020 election -- with his advisors reportedly floating the idea of invoking martial law, triggering outrage and disbelief in Washington, AFP reported. According to accounts in The New York Times, CNN and The Wall Street Journal, the president found time on Friday to oversee a turbulent White House meeting to discuss new ways to resist or overturn Biden's victory -- with the idea of deploying the military to assist in his fight raised, before being shot down.

There are no tweets matching the text in the misleading post on Trump’s page in Politwoops, a database of deleted politicians’ tweets maintained by US investigative journalism organisation ProPublica.

No major media outlets reported on Trump’s declaration of martial law on Twitter, according to keyword searches on Google News.

A Google reverse image search of the image in the purported tweet found this Reuters image hosted on the website of photo agency Alamy, showing an 2010 anti-corruption arrest in Puerto Rico, which is unrelated to the claim in the misleading posts.

The caption reads: “An FBI agent escorts one of the police officers and prison guards arrested in a major anti-corruption operation across the U.S. Caribbean territory following his first court appearance at the Puerto Rico Federal Court Building in San Juan, October 6, 2010.” 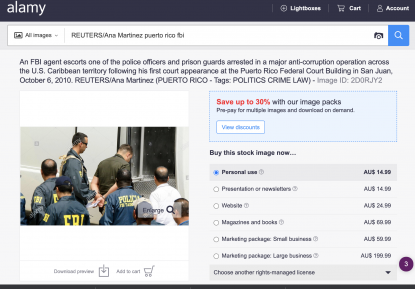 A screenshot of the Alamy website showing the image as of December 24, 2020.