Multiple posts shared hundreds of time on Facebook and Twitter claim that an American Muslim woman, Dr. Debbie Almontaser, "made history" by reciting the Koran during the inauguration ceremony of US President Joe Biden. The claim was shared alongside a photo of Dr. Almontaser and a separate image of Biden at his swearing-in ceremony on January 20, 2021. In fact, Dr. Almontaser read Koran verses at a vitrual inaguration prayer service that Biden attended on January 21, 2021, not at his swearing-in ceremony.

The claim was published on Facebook here on January 27, 2021. The post has been shared more than 900 times.

The post’s caption reads: “Alhumdulilah! (Praise to Allah) She is the first Muslim woman to read the Holy Qur'an in the Presidential Inauguration in United States. She made History!” The claim, however, misrepresents the events staged for President Biden's inauguration.

A reverse image and keyword searches on Google found the woman in the photo is Dr. Debbie Almontaser, the board president of Muslim Community Network and a senior advisor for Emgage Action, a major Muslim American civics organisation.

Dr. Almontaser recited Koran verses at a vitrual inauguration prayer service on January 21, 2021, one day after Biden's took his oath of office at the inaugural swearing-in ceremony on January 20.

The prayer service, which was hosted by the Washington National Cathedral, can be seen on the Biden Inaugural Committee's YouTube channel here.

Below is a screenshot of the YouTube video showing Dr. Almontaser reading of verses from the Koran: 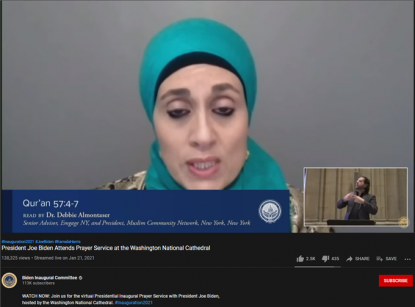 A screenshot taken on February 1, 2021, of the YouTube video from Biden Inaugural Committee.