Skip to main content
A dog runs in a blossomed field in the Greek capital of Athens, with the ancient Acropolis in the background, on February 10, 2019. (AFP / Louisa Gouliamaki)

A claim has been shared in multiple posts on Instagram, Facebook and Twitter which say unlike in Indonesian language, “you are a dog”  is a compliment in Greek. The claim is misleading. The expression is “almost never used” as a compliment, Greek speakers tell AFP. 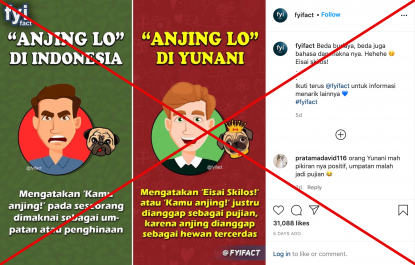 The Indonesian-language meme shared in the post says:
“‘You are a dog’ in Indonesia
Telling someone ‘You are a dog!’ is a swear word or an insult.

A similar claim has been shared more than 1,000 times after it appeared on Facebook here and here, as well as on Twitter here and here.

The claim has also been shared on Instagram here, where it has been liked more than 12,000 times.

A Greek-speaking AFP journalist in Athens says: “It’s quite uncommon for this expression to be used as a compliment.”

“‘You are a dog’, sometimes in slang, [is used] when someone for example plays football and his teammates or coach applaud him for trying hard, not getting tired, etc.,” he said on May 17, 2021.

“‘He or she works like a dog’ when someone works a lot,” he added. “In general, it’s almost never used with this explanation in mind.”

A Greek diplomat in Indonesia also says the expression is not usually meant as a compliment.

“The main meaning of this phrase eisai skilos, you’re a dog, has to do more with the way you work, means that you’re a workaholic person,” Minas Ounanian, deputy head of mission and consul of the Greek embassy in Jakarta, said on May 25, 2021.

He also said if someone is characterised as a dog, they are usually considered not having an attractive appearance.