Multiple posts on Facebook and Twitter claim that the Pakistan Super League 6 cricket tournament, which was postponed after seven players tested positive for Covid-19, will resume on March 11, 2021. The claim is false: as of March 9, 2021, the Pakistan Cricket Board has not yet announced any date to resume the tournament, but said that the remaining matches will be held before the end of the year.

The claim was published in a text graphic on Facebook here on March 4, 2021. 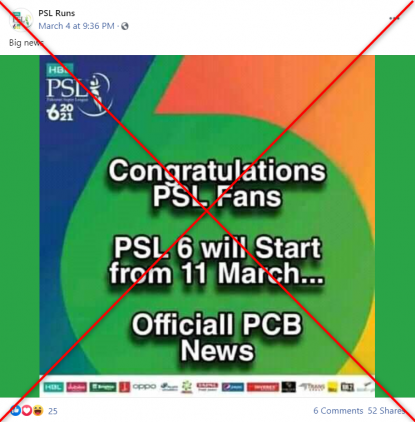 In a press conference on March 4, 2021, the PCB’s Chief Executive Wasim Khan said that a date to resume the tournament has not yet been decided, but that matches will be held before the end of the year.

"We will try to find a window to complete the remaining matches before the end of the year," Khan told the press, as AFP reported here.

As of March 9, 2021, there are no credible media reports or PCB statements to suggest the tournament will resume on March 11, 2021.

ESPNcricinfo, a cricket news website, reported here that the tournament is likely to resume in May 2021.