This image shows an art installation staged in Toronto in 2016

An image showing a street laden with illuminated books has been shared in multiple Facebook posts in March 2021 alongside a claim it shows an annual book exchange festival in Toronto, Canada. The claim is misleading: the image actually shows an art installation staged in Toronto in 2016.

The post's caption reads: “In Toronto, Canada, there is an annual festival where the street turns into a river of donated books and anyone can take what they want.” 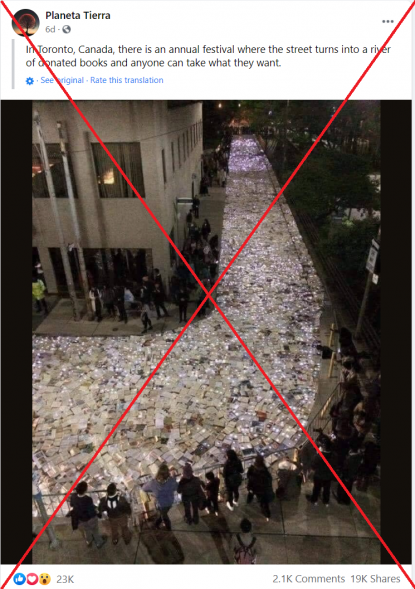 The photo was also shared alongside similar claims on Facebook here, here, here and here.

A reverse Google image search found that the photo in fact shows an art installation titled "Literature vs. Traffic", which was staged in Toronto in 2016. Corresponding photos were published in this 2016 BoredPanda article about the installation. 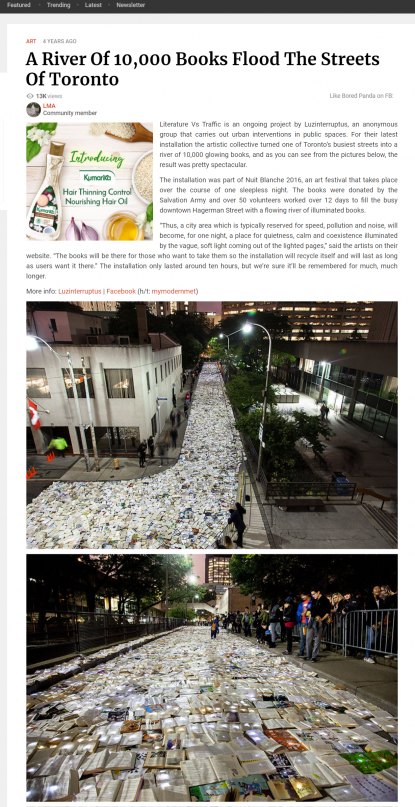 The first two paragraphs of the article read: “Literature Vs Traffic is an ongoing project by Luzinterruptus, an anonymous group that carries out urban interventions in public spaces. For their latest installation the artistic collective turned one of Toronto’s busiest streets into a river of 10,000 glowing books, and as you can see from the pictures below, the result was pretty spectacular.

"The installation was part of Nuit Blanche 2016, an art festival that takes place over the course of one sleepless night. The books were donated by the Salvation Army and over 50 volunteers worked over 12 days to fill the busy downtown Hagerman Street with a flowing river of illuminated books.”

A further search on Luzinterruptus' official website found a similar image of "Literature vs Traffic" published here on October 21, 2016. The photo was also posted here on the group's Facebook page.

A review of the art installation’s cited location — Hagerman Street and Elizabeth Street in Toronto — on Google Street view confirmed it is the same location seen in the image shared in the misleading post.

Below is a comparison between the Google Street View (L), the photo featured in the BoredPanda article (M) and image shared in the misleading posts (R) with similarities circled by AFP:

Comparison among the StreetView (L), image that appeared in the article (M) and the misleading posts’ image (R). Similarities have been highlighted by AFP in yellow:

A Toronto city government spokesperson confirmed that the photo shared in the misleading posts is not related to an annual book donation festival.

“The project is called Literature vs.Traffic by the artist collective Luzinterruptus based in Madrid, Spain. It was part of the exhibition curated as part of Nuit Blanche 2016,” the official told AFP in an email on March 6, 2021.

Luzinterruptus also confirmed to AFP via Facebook messenger on March 4, 2021, that the group did install "Literature vs. Traffic" in Toronto in 2016.