A video has been shared in multiple social media posts that claim it shows a girl suffering from severe side effects after receiving a Covid-19 vaccine. The claim is false: the clip has circulated since at least 2015 in reports about a girl in Kazakhstan who was admitted to hospital after being vaccinated for measles. 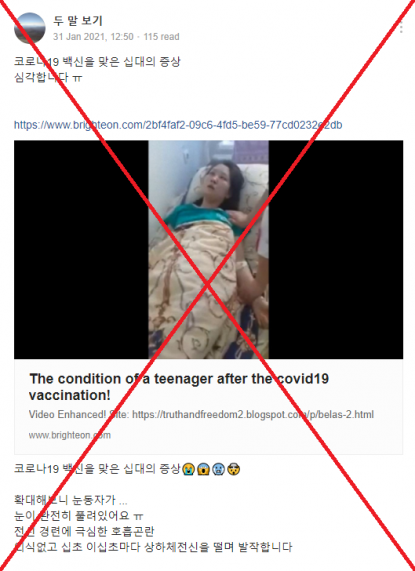 Screenshot of the misleading Naver Band post taken on February 8, 2021.

The Korean-language caption claims the video shows “the condition of a teenager after the Covid-19 vaccination.”

“She is experiencing a convulsion and severe dyspnoea,” it reads in part. “She is unconscious and has a seizure every 20 seconds.”

The video was also shared alongside similar claims on Facebook here and Naver Blog here.

A reverse Google image search found that the footage was published on YouTube here on March 21, 2015, nearly five years before the Covid-19 pandemic began.

Below is a screenshot comparison between the video shared in the misleading posts (L) and the video published on YouTube in 2015 (R):

A screenshot comparison between the video shared in the misleading posts (L) and the video published on YouTube in 2015 (R).

Radio Free Europe/Radio Liberty (RFE/RL) also reported on the video here on March 20, 2015. The Russian-language article, which features screenshots from the footage, states that the video shows a girl in the Kazakh city of Zhanaozen who was admitted to a hospital after getting vaccinated against measles.