A video that claims former Philippine Senator Mar Roxas was arrested for illegal drug possession has been viewed thousands of times in multiple YouTube and Facebook posts. The claim, however, is false; the video is a hoax news report and police denied the claim.

The video has been viewed more than 29,000 times since it was published on YouTube here on February 3, 2021. 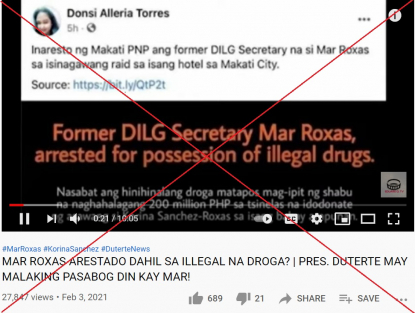 A screenshot of the misleading post, taken on February 5, 2021

The video shows a screenshot of what appears to be a news report posted by a social media user named Donsi Alleria Torres.

The purported report reads in part: “Former DILG Secretary Mar Roxas arrested for possession of illegal drugs". It also claims that Roxas was arrested in Makati City in the Philippine capital region.

“DILG” refers to the Department of Interior and Local Government, which Roxas headed from 2012 to 2015. He also served as a senator before running for president in 2016 and losing to Philippine President Rodrigo Duterte.

A similar video making the same claim was also shared here on YouTube; and here and here on Facebook.

Other social media media users appeared to be believe the claim and posted comments such as "You're the devil, Mar Roxas, you're a drug dealer!" and "Keep him in jail while he’s under investigation."

However, the claim is false and the video is a hoax report.

Keyword searches on Google traced the purported report to a Facebook post from January 31, 2021, that has since been removed. The report bears the logo of Rappler, a popular Philippine media organisation.

Rappler, however, denied publishing the story.

“This is a FAKE news report,” the organisation said in a statement on February 5, 2021. “Rappler DID NOT publish any story about the supposed arrest of former DILG Secretary Mar Roxas for possession of illegal drugs.”

The Philippine Star newspaper also denied rumours that a person sharing the false story on social media was an employee.

“It has come to our attention that a certain ‘Donsi Alleria Torres’ on Facebook, who shared a false story about Mar Roxas on her timeline, is claiming to be part of our organization,” the paper said on February 1.

“We wish to clarify that this person is not a Copy Editor at The Philippine STAR and is not in any way connected to our organization.”

The Makati City government also denied the hoax report. “Our (police) says it is not true,” a spokesperson told AFP in a Viber message on February 6, 2021.

Keyword searches on Google also found no credible reports stating that Roxas had been arrested for drug possession in 2021.

The video in fact shows remarks by Duterte that have circulated as early as 2016.

A clip of Duterte speaking that starts 45 seconds into the video was in fact filmed ahead of the Philippines’s 2016 elections. AFP traced the footage to a Rappler report published on March 30, 2016 showing Duterte slamming his presidential rival Roxas on key campaign issues including taxation and federalism.

Meanwhile, the clip that starts at the 03:06 mark shows an April 2019 speech, where Duterte attacked Roxas for a botched military operation in the southern Philippines.