Skip to main content
A health worker takes a Covid-19 test outside a makeshift clinic in a sports stadium in Port Moresby on April 1, 2021. (AFP / Andrew Kutan)

Facebook posts shared repeatedly by social media users worldwide claim that Pfizer has announced an “upgrade” to its Covid-19 vaccine that includes a “Microsoft chip for reduced symptoms”. The claim is false: the article originated on a satirical website. A search of both Pfizer and Microsoft’s media releases found neither company has announced an “upgrade” to any Covid-19 vaccine.

The claim was shared to a Facebook group here based in Papua New Guinea on April 14, 2021. 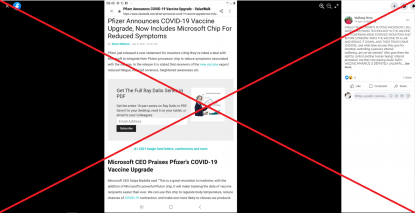 The article goes on to claim that Pfizer released a statement saying it had “inked a deal with Microsoft to integrate their Pluton processor chip to reduce symptoms associated with the vaccine”.

The story then goes on to allegedly quote Microsoft CEO Satya Nadella saying: “This is a great revolution in medicine”.

According to a note at the bottom of the widely shared article, the story was originally published on a website called StonkMarket.

StonkMarket describes itself as a satirical financial news website that aims to “provide daily humor and make stonks go up”. Stonks is a deliberate misspelling of stocks which has become internet slang, according to Dictionary.com.

The StonkMarket article includes the same headline and claims as the article shared in the misleading posts, as shown in the screenshot comparison below: 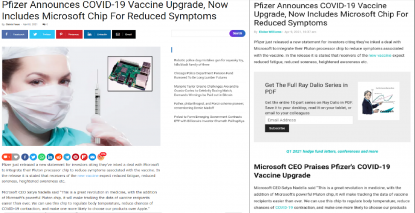 An online search of archives of media releases for Pfizer and Microsoft found that neither company has announced plans to release a “vaccine upgrade” as of April 18, 2021.