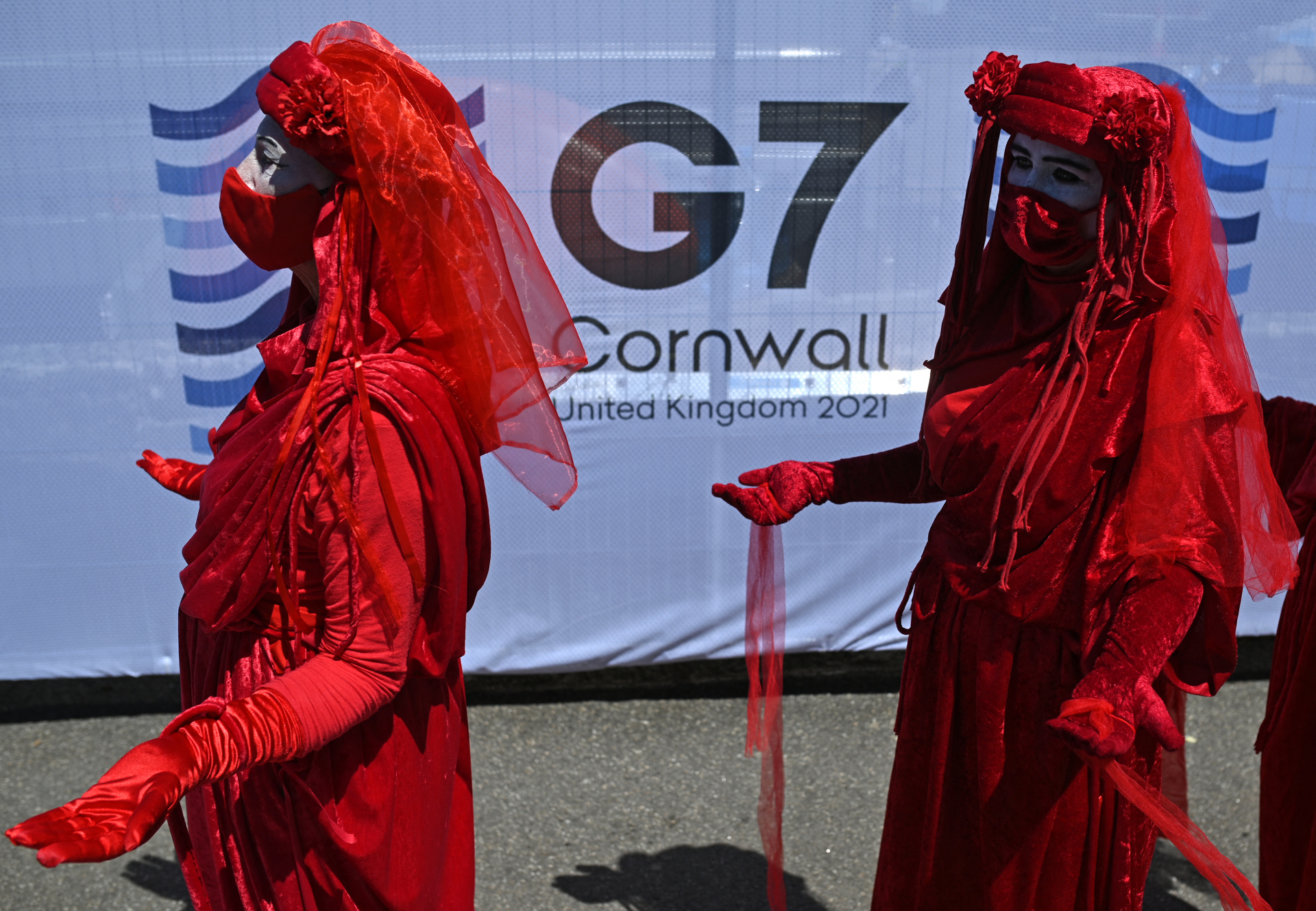 The Red Rebel Brigade march past the media center at an Extinction Rebellion protest in the streets of Falmouth, Cornwall during the G7 summit on June 12, 2021 (AFP / Oli Scarff)

Images of people dressed as mimes and black birds depict a satanic ritual on the margins of the G7 summit in England, online posts claim. This is false; both groups were part of demonstrations organized by environmental activists who had no formal connection with the leaders’ meeting and had nothing to do with devil worship, a G7 spokesman and a protest organizer said.

“Part of the entertainment and opening for the G7 summit,” reads the caption of a June 13, 2021 Instagram video. It showed about a dozen people solemnly walking on a sidewalk in single file with their arms extended outwards, wearing white face paint and red veils.

“I believe these creatures are there to represent satan’s bride,” the author says. “These people are demonic and they are clearly showing you who and what they serve.” 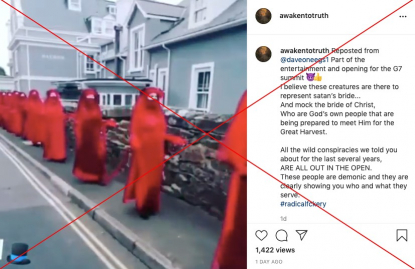 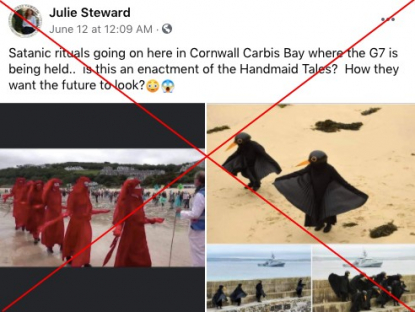 Similar posts appeared on Facebook and also showed photos of another group of people dressed as birds, spreading their wings widely on a beach.

“Satanic rituals going on here in Cornwall Carbis Bay where the G7 is being held,” one Facebook user wrote, before the post was shared as a screenshot on Instagram.

Claims of Satanism are a feature of QAnon conspiracy theories whose adherents believe that powerful figures including Hillary Clinton and Barack Obama are part of a globalist cabal that engages in pedophilia.

The unproven slander has gained increasing support through social media.

While the footage did take place in England during the  summit of seven wealthy democracies, it shows protesters, not Satanists.

“We can confirm that this was not arranged by the G7 organizers and had nothing to do with the UK government,” Joseph Potts, a spokesman for the UK’s G7 2021 presidency, told AFP.

“I believe it was a protest organized by the Extinction Rebellion environmental protest group,” he added.

Mat Osmond, a member of Extinction Rebellion (XR), an environmental movement that often uses creative means to promote its message, confirmed that the social media footage was taken on June 11 during a demonstration by the group.

“I can wholeheartedly reject the idea that XR has any connection with Satanism. It is an utterly absurd idea!” Osmond told AFP. A member of Extinction Rebellion in Cornwall, Osmond guided some of the red-clad protesters through the streets of St Ives to the town’s beach on that day.

It was one of several protests that drew thousands during the June 11-13 summit while world leaders including US President Joe Biden discussed the global Covid-19 vaccination effort, China, and other topics.

The demonstrators affiliated with Extinction Rebellion called on governments to uphold their climate commitments under the 2015 Paris accord.

Local media outlets that reported on the protest made no mention of Satanism. An AFP photographer captured the scene and did not mention devil worshipping.

“The Red Rebels, pictured here, are mime, are street theatre... About as far as you can get from what QAnon hyperbole even means when it waffles about Satanic ritual,” he added.

Osmond confirmed that the people dressed as black birds were members of Extinction Rebellion.

Pictures of their demonstration are available on the Alamy stock photo website under the caption “XR Protesters, wearing blackbird costumes in St Ives, during the G7 summit in Cornwall. Picture date: Friday June 11, 2021.”