Skip to main content
British MPs Nusrat Ghani (C) and Sir Iain Duncan Smith (R) join members of the Uyghur community as they demonstrate in London to call on the British parliament to vote to recognise persecution of Uyghur Muslims in China.

Social media posts shared hundreds of times claim that a recent UK parliament “vote” on the alleged Uyghur Muslim genocide in China’s Xinjiang was only attended by five British MPs. The claim is misleading: the UK parliament passed a motion, not a vote, on April 22, 2021 declaring that China’s Uyghur Muslims were victims of genocide. Official records show 23 MPs contributed to the debate -- some in-person and some via video call.

The image in the posts shows the UK’s House of Commons, where British MPs debate and vote on legislation. There are 650 elected MP seats in the UK parliament. 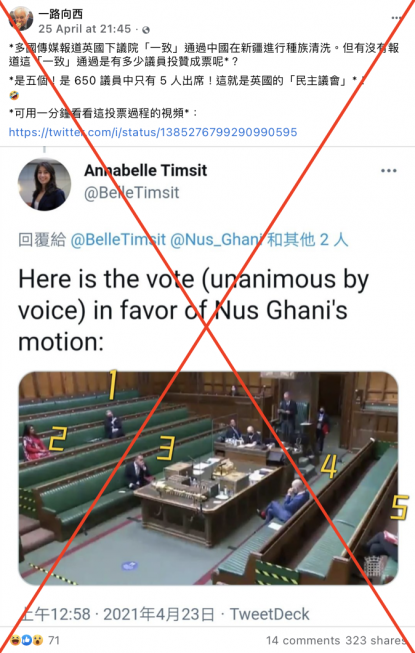 The misleading post misrepresents this tweet about the UK Parliament’s motion on Xinjiang by Annabelle Timsit, a reporter from US news organisation Quartz.

The Facebook post’s traditional Chinese-language caption translates to English as: “*Media from multiple countries reported that the British House of Commons unanimously Designates Abuses in Xinjiang as Genocide in Historic Vote. But did they reported on how many members voted for this ‘unanimous’ pass*? *It's five! Yes, only 5 of the 650 members are presented! This is the ‘Democratic Parliament’ in the UK*!​ *You can take a minute to watch the video of the voting process*”.

British MPs passed a non-binding motion on April 22, 2021, declaring that Uyghur Muslims in China were "victims of crimes against humanity and genocide”.

The move was yet another sign of the British parliament hardening its stance against China over the treatment of Uyghurs in the Xinjiang region.

The Chinese government responded by saying that "the so-called genocide in Xinjiang is a big lie concocted by international anti-China forces”, AFP reported here.

Other Chinese social media posts shared a similar misleading claim about the vote on Facebook, including here, here and here.

A Hong Kong pro-government columnist also published this claim on the local newspaper Headline Daily here, which was later shared on Facebook here, here and here.

The posts reference a non-binding motion on the mass human rights abuses in China’s Xinjiang that was passed by British MPs on April 22, 2021.

It was not a vote in the UK parliament, as claimed in the misleading social media posts.

A motion is a resolution presented to the House of Commons for discussion or a vote, prior to any debate or vote in the UK Parliament. 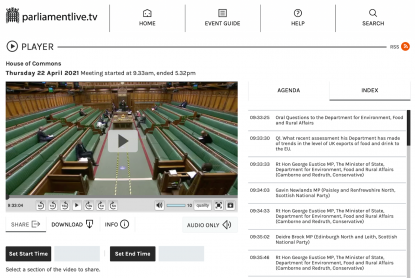 A screenshot, taken on May 17, 2021, of the archive of the Parliament meeting.

The official record from the UK Parliament website shows 23 MPs, including deputy speaker Nigel Evans MP, contributed to the debate on Xinjiang.

They unanimously supported the motion to classify the persecution of Uyghurs in Xinjiang as a “genocide”, the record shows.

An earlier record of the debate's attendees on the UK Parliament website shows up to 14 MPs planned to join the debate by video call.

Due to the coronavirus pandemic, MPs can either participate in-person or virtually for debating a motion -- but not for parliamentary votes.

The misleading claim was also debunked by a Hong Kong-based fact-check organisation Factcheck Lab on May 12, 2021 here.