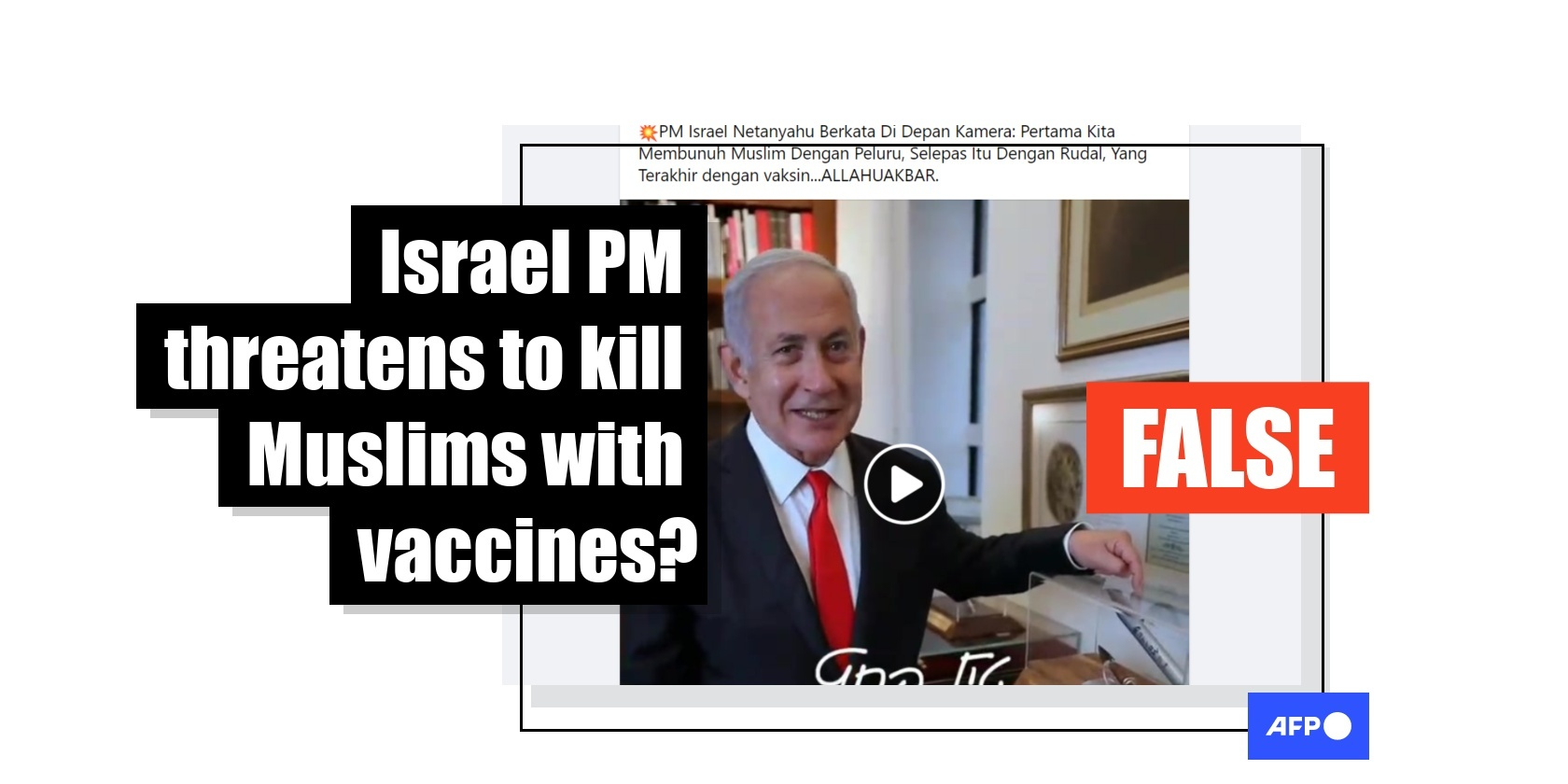 A video has been viewed hundreds of thousands times in Facebook, Instagram, Twitter, YouTube and TikTok posts that claim it shows Israeli Prime Minister Benjamin Netanyahu purportedly threatening to kill Muslims with vaccines. The claim is false: the video in fact shows Netanyahu discussing the syringe used when he was  vaccinated against Covid-19; and nowhere in the video does he mention “killing Muslims”.

The 27-second video shows Israeli Prime Minister Benjamin Netanyahu talking to the camera while gesturing at a number of objects on display, including a syringe.

The Malaysian-language caption reads: “Israel PM Said in Front of Camera: First We Kill Muslims With Bullets, After That With Rockets. Finally with vaccines…GOD IS GREAT.” 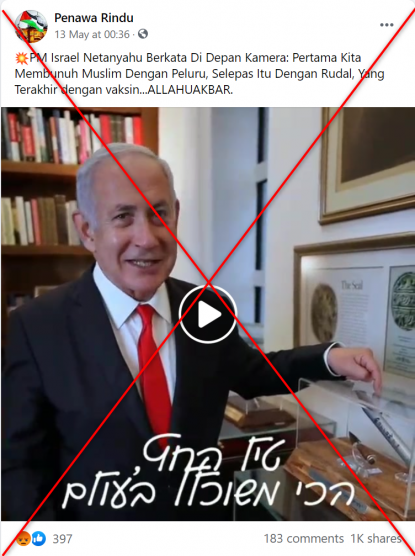 The video was shared online amid escalating violence between Israel and Hamas, which began on May 10, 2021. More than 200 people have died, the large majority Palestinians killed by Israeli rockets, AFP reported here.

The video has also circulated with a similar claim in Indonesian here and in Arabic here.

A reverse image search on Yandex, followed by Google keyword searches, found a longer video was posted on Netanyahu’s official Instagram account here on January 18, 2021. The 44-second clip is captioned: “Listen to a story.”

Below is a screenshot comparison of the video in the misleading posts (L) and Netanyahu’s Instagram video (R): 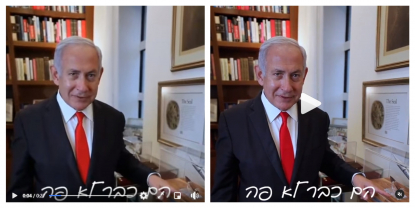 Netanyahu also posted the same video here on his official Facebook page on the same day.

A Hebrew-speaking AFP journalist translated what Netanyahu said in the video and confirmed he did not mention “killing Muslims” as the misleading posts allege.

Gesturing to a display case in his office, the prime minister says: “Listen to a story, every time there is a visitor from abroad, I show him this arrowhead, a replica of a Roman arrowhead from the fight in Yodfat. Yodfat was the first Galilee fortress to fall to the Romans, then Gamla, then Jerusalem, huge destruction. Then I tell them, that’s the Romans, they’re not here anymore. This is their arrow.”

Then he gestures to a model of the Israeli Arrow anti-ballistic missile in the same display case, saying: “This is our arrow, the most sophisticated in the world.”

Netanyahu proceeds to point to a second display case with a syringe inside, saying: “Now I show them something else, another arrow. This is the syringe that gave me the first vaccine out of the millions of vaccines that we brought to Israel. We’ll be the first country in the world to exit the coronavirus [crisis]. With faith, everything is possible.”

Israeli newspaper Haaretz published this report about Netanyahu’s video on January 18, 2021, headlined: “Netanyahu Keeps Syringe From His Coronavirus Vaccine on Display in His Office.”

The report said: “On the wood base of the syringe’s display, there is a plaque bearing one of Netanyahu’s own quotes from that day: ‘One small shot for man, one giant step for the health of us all.’”

Having vaccinated nearly five million Israelis, or over half of the population, with two doses of the Pfizer-BioNTech vaccines, Israel signed another agreement with pharmaceutical giant Pfizer on April 19, 2021, to buy millions more doses of the vaccines.