Multiple posts by Newspapers and blogs across Nigeria claim that David Oyedepo, who runs one of the biggest churches in the world, was recently denied a US visa. AFP found no evidence to support the claim; both the church and the US embassy in Nigeria have rejected the claim as false.

Local newspaper THISDAY reported on January 31 that David Oyedepo, founder of the Living Faith Church Worldwide, was denied a visa at the Lagos office of the US embassy. Quoting sources, the newspaper said the preacher told the embassy he had been travelling to the United States since  the 1980s and “had not violated any rules or committed any crime to have warranted being denied a renewal of his visa”.

The preacher is also the founder and chancellor of Covenant University, Nigeria’s best university, according to THE rankings. In 1999, he was reported to have built the largest church in the world. 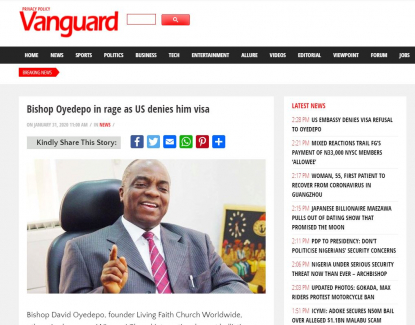 A screenshot taken on February 3, 2020, showing a report by Vanguard newspaper citing the Thisday report

The story emerged as US President Donald Trump in late January announced plans to slap immigration restrictions on citizens of six countries including Nigeria. His administration confirmed the ban on February 1 as AFP reported, with the curbs set to come into force on February 22.

In response, Nigeria’s government said it had created a commission to work with the US to cooperate on the restrictions.

The Church says Oyedepo renewed his US visa in 2019

AFP’s calls to the church have not been returned. However, church spokesman Sheriff Folarin denied the visa report in a statement reported in the local media.

“We wish to put it on record and categorically submit that this piece of information is NOT TRUE. At no time was the Bishop denied (a) visa nor did he create a scene at the US consulate in Lagos, as purported by some mainstream and online newspapers,” the church said.

“The Bishop renewed his visa, last year, without any initial denial or drama, or scene. The Bishop was NOT at the Embassy or Consulate anytime this year. Bishop has been in Canaanland all this week.

“Bishop Oyedepo is a good friend of the US government and has a very good relationship with US Embassy and Consulate in Nigeria.”

The US  embassy says the preacher was not denied visa

The United States embassy in Nigeria has also denied the allegation.

“Be advised, the reports making the rounds about a visa being denied to Nigerian Bishop Oyedepo are false,” the embassy said via Facebook. “If you have seen this manufactured item in the media, help defeat this #misinformation by communicating to everyone that it is completely false.”

The US embassy in Nigeria told AFP in 2019 -- when a similar spate of false news hit the media -- that “under U.S. law, individual visa records are confidential” and details cannot be provided on any persons affected by US immigration policies.

THISDAY has now deleted its article.

Pelosi did not pledge to resign if impeachment ‘fails’

Chinese authorities have not recorded 300,000 confirmed novel coronavirus cases; there is no precise figure available for overall infections (as of February 4, 2020)