Hundreds of people queue outside an Australian government welfare centre, Centrelink, in Melbourne on March 23, 2020, as jobless Australians flooded unemployment offices around the country after Prime Minister Scott Morrison warned the coronavirus pandemic would cause an economic crisis akin to the Great Depression. (AFP / William West)

A post has been shared tens of thousands of times on Facebook and Twitter which claims that a factory in the Australian city of Melbourne has been hoarding essential supplies including baby formula, toilet paper and hand sanitiser for export to China during the novel coronavirus pandemic. The claim is false; police said the accusation was "false". The company cited in the misleading posts also refuted the claim. 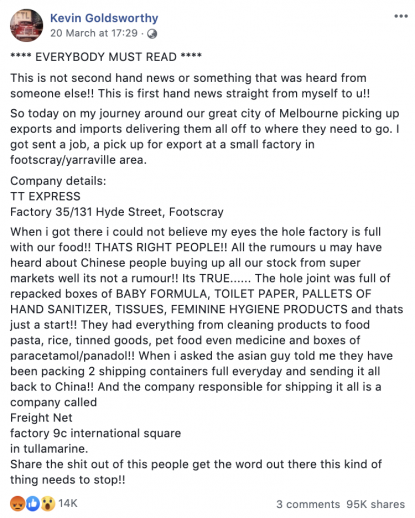 It reads in part: “When i got there i could not believe my eyes the hole factory is full with our food!! THATS RIGHT PEOPLE!! All the rumours u may have heard about Chinese people buying up all our stock from super markets well its not a rumour!! Its TRUE...... The hole joint was full of repacked boxes of BABY FORMULA, TOILET PAPER, PALLETS OF HAND SANITIZER, TISSUES, FEMININE HYGIENE PRODUCTS and thats just a start!! They had everything from cleaning products to food pasta, rice, tinned goods, pet food even medicine and boxes of paracetamol/panadol!! When i asked the asian guy told me they have been packing 2 shipping containers full everyday and sending it all back to China!! And the company responsible for shipping it all is a company called
Freight Net
factory 9c international square
in tullamarine.
Share the shit out of this people get the word out there this kind of thing needs to stop!!”

A similar claim was also shared here, here, and here on Facebook; as well as here and here on Twitter.

Victoria Police published a statement here on Twitter on March 22, 2020, saying they had spoken to the company and found the claims to be “false”.

We are aware of a social media post being shared claiming a freight company was stockpiling food and sanitary items in a Footscray factory for overseas export.

Police have spoken to the company and found these claims to be false. pic.twitter.com/kWGOHK7kMV

“We are aware of a social media post being shared claiming a freight company was stockpiling food and sanitary items in a Footscray factory for overseas export,” the statement reads. “Police have spoken to the company and found these claims to be false.”

The logistics company named in the misleading post, Freightnet, also published a statement here in response to the Facebook post, stating that it “100% refutes” the claims.

“I cannot stress enough that the post is a lie, it is factually incorrect but saddens me more that people will take it as truth without any research or fact. We are facing unprecedented times, worldwide and to have this lie circulating when people are going without day to day necessities, the response is understandable (people should be concerned IF this was the case) but the fact of the matter, it is wrong," the company's statement read.

Freightnet also said that it was "seeking legal avenues" in response to the false claim.