A video viewed tens of thousands of times on Facebook and YouTube purports to show billionaire businessman Jack Ma praising China’s response to the outbreak of the novel coronavirus, COVID-19. But the video has been doctored; the original video shows Jack Ma at a meeting of former Alibaba employees in 2018, at least one year before COVID-19 was first detected in the Chinese city of Wuhan; the voiceover in the clip has been taken from another clip which shows a different man speaking.

It includes a Mandarin Chinese voiceover and subtitles playing throughout. It also features the logo for Douyin, the Chinese version of video-sharing app TikTok.

Part of the voiceover translates to English as: “The greatness of China lies in the fact that we not only controlled the domestic epidemic situation over the country with 1.4 billion people, but more importantly, China has done something that impressed the world today. The state has each province support a country, so Jiangsu supports Pakistan, Shanghai supports Iran, Guangdong supports Iraq, and Sichuan supports Italy. I still remember that when a Chinese person was handing out masks in the streets of Italy ten days ago, he was even dismissed. Today in Italy, all the media groups praise China in full newspaper versions. The strength of Chinese people no longer stands for GDP growth, but the unity of our 1.4 billion people and the responsibility the country has taken for the world.” 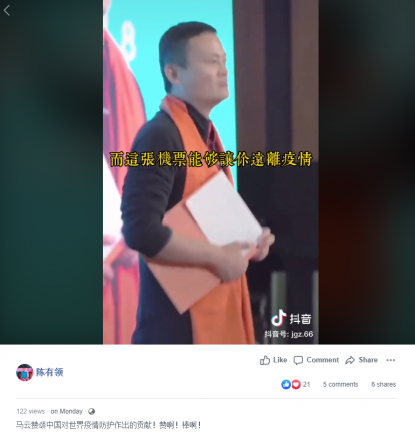 During the ongoing COVID-19 pandemic, Ma has donated test kits and facemasks to affected countries, including the United States, through his foundation.

Closer examination of the video shows Ma is standing in front of a screen with simplified Chinese characters that read “Alibaba alumni meeting” and “2018”.

Below are two screenshots from the misleading video, with the identifiable characters circled in red by AFP: 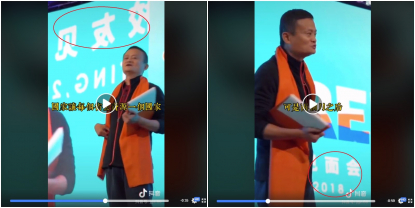 Two screenshots from the misleading video

A keyword search found this video of the third “Alibaba Alumni Meeting” in 2018, a gathering of former staffers, published on the video streaming platform 361t.org.

Below is a screenshot of the video on the Douyin app: 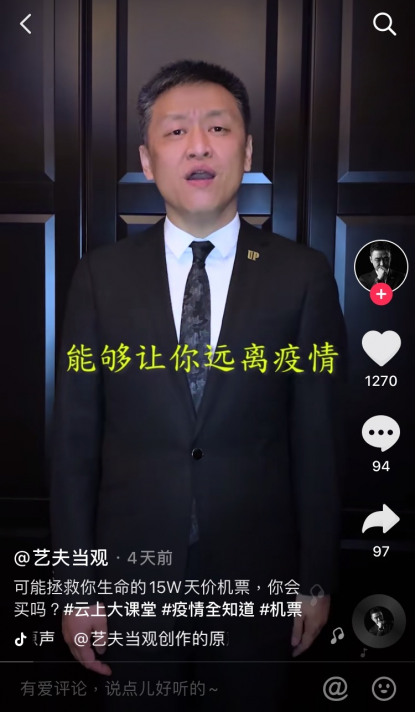 Screenshot of the video on the Douyin app