Two identical images have been shared in multiple Facebook posts alongside a claim they show a burning town in Myanmar’s western Chin State as deadly clashes between the military and anti-coup rebels continued in June 2021. The claim is misleading: the image actually shows a fire in a Burmese refugee camp in Thailand in March 2013.

The images were shared here on Facebook on June 7, 2021. It has been shared more than 50 times.

The post’s Burmese-language caption translates to English as: “The situation in Mindat is really really bad. Please speak out against this genocide. If you can’t speak out, please type ‘up’”. 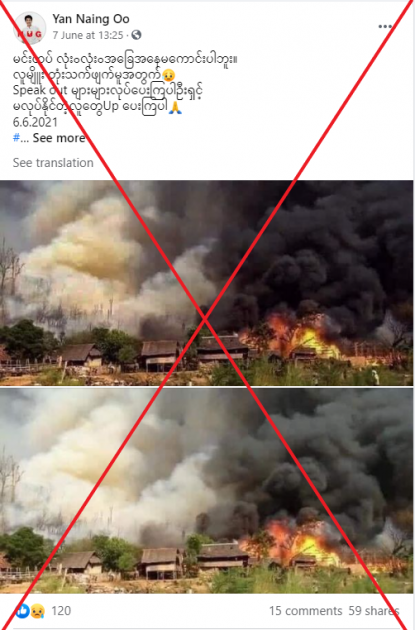 The military declared martial law in the town and launched artillery attacks after its residents united against the military following the coup.

Mindat has since become a hotspot after deadly clashes between the Myanmar army and anti-coup rebels, as AFP reported here.

Comments from some users on the post suggested they were misled by it.

One user commented: “So sad to see this”.

Another wrote: “I hope everyone is safe really soon”.

The images have been shared with a similar claim on Facebook here, here and here.

The image actually shows a fire at a refugee camp in Thailand in 2013.

The report was about a fire in Mae Surin refugee camp in Thailand’s Mae Hong Son Province.

Below is a screenshot comparison of the image in the misleading post (L) and the image posted by Mizzima News (R):

The fire killed more than 30 people and left thousands of inhabitants homeless. AFP reported on the story here.

The same image was published in a March 28, 2013 report about the same fire by Thai media outlet Chiang Rai Times here.

The Border Consortium, a non-profit organisation working with refugees, also posted a video of the blaze here on its YouTube channel.

It shows similar footage as seen in the image in the misleading posts.