A photograph has been shared in multiple Facebook and Instagram posts that claim it shows a public hanging in “Nuremberg, Germany” where “members of the media” were purportedly executed. The posts are misleading: the photograph has in fact circulated in reports that state it shows a public hanging in Kiev, Ukraine -- not in Nuremberg, Germany. Only one member of the media was executed as part of the Nuremberg trials, according to an expert. 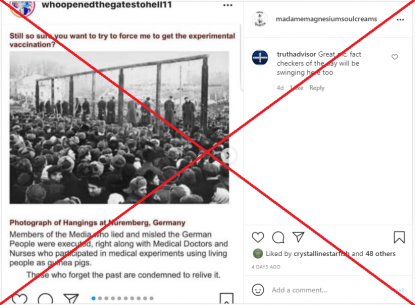 A screenshot of the misleading image, taken June 15, 2021

The photo appears to show a public execution, and is overlaid with text that states: “Photograph of Hangings at Nuremberg, Germany.

“Members of the Media, who lied and misled the German People were executed, right along with Medical Doctors and Nurses who participated in medical experiments using living people as guinea pigs.”

The Nuremberg trials prosecuted the surviving Nazi officials after the conclusion of World War II. The series of 13 trials were presided over by an International Military Tribunal between 1945 and 1949.

The photo was also posted on social media alongside similar claims here, here and here.

AFP found the photo was shared in this academic paper that states it shows the public hanging of “Germans convicted of war crimes” in Kiev after World War II.

The paper lists the Ukrainian Central State Archive of Documentary Film and Photography as the source for the photo, which was obtained via the United States Holocaust Memorial Museum (USHMM) archives.

In a June 15 email to AFP, the USHMM confirmed the photo is part of their catalog which is not available online but only on site for researchers.

The USHMM also supplied the original photo caption, which reads: “Execution of Hitlerites after their sentencing. Kiev 1946.”

Below is a screenshot comparison of the photo in the misleading posts (L) and the photo from USHMM (R):

A photo comparison of the image featured in the Instagram post (L) and one supplied by the USHMM archive (R).

Photos and videos which appear to show same public execution in Kiev but taken at different angles are publicly available here on stock photography website Agefotostock and here on Getty Images.

Only one member of the media was convicted and hanged during the Nuremberg trials, Richard Wilson, Professor of Anthropology and Law at the University of Connecticut, told AFP on June 11, 2021.

Julius Streicher founded and ran the anti-semitic newspaper Der Steurmer, which became a central element of the Nazi propaganda machine.

An analysis by AFP through the list of the Nuremberg executions also found Julius Streicher was the only member of the media among the names.