Two photos of a group of men sitting next to rows of ammunition and stacks of cash have circulated on social media with a claim that they show the arrest of Nigerian criminals who abducted students in northern Kaduna state in April 2021. But the claim is false: the images show old unrelated events in the capital Abuja. Authorities in Kaduna denied that the kidnappers had been arrested.

Popular Nigerian pastor Sunday Adelaja published the pictures in a Facebook post, which has been shared more than 400 times since publication on June 9, 2021. The Ukrainian-based preacher has nearly 200,000 Facebook followers.

“Let’s give a shout out to our Nigerian army and police officers. Kidnappers of Greenfield university students caught with the ransom they collected. Respect to our officers!” the post’s caption reads.

Adelaja’s claim also appeared in other posts alongside the images, according to data by social media monitoring tool CrowdTangle.

Five students were killed while the remaining victims were released and reunited with their families on May 29, 2021, the university said in a statement.

Nigerian broadcaster ChannelsTV reported that the parents of the released students claimed they had paid N150 million (300,000 USD) ransom for their rescue. 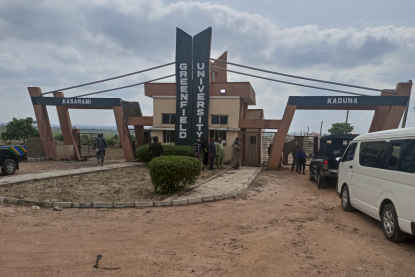 A general view of the gate of the Greenfield University in Kaduna, Nigeria (Photo: Nasu BORI / AFP)

But the images shared in Adelaja’s post are several years old and predate the recent kidnapping.

AFP Fact Check ran a Google reverse image search and found one of the images in an article from October 22, 2019, on the website of Nigerian daily newspaper Independent.

“Operatives of the Nigeria Police Force have recovered a total of 10.1 million [naira] from suspected kidnappers of one Alhaji Tuku Zubairu, a wealthy businessman from Sokoto State,” the newspaper’s online article reads.

Screenshot taken on June 15, 2021, showing the image on Independent’s website

The image of what appears to be several bundles of one-thousand naira shows “the N10.1m recovered from the suspects,” according to the newspaper.

Another reverse image search carried out on Yandex led to the other image in another article published on the same date in 2019. The photo accompanies a similar story about the police parading suspected kidnappers through Nigeria’s capital Abuja.

Nigerian daily newspaper The Punch also documented the scene in a video clip published on YouTube.

Kidnappers yet to be arrested

There is no evidence that the criminals involved in the Kaduna abduction have been detained so far.

“I have been inundated with calls, messages and emails to confirm if the bandits responsible for the kidnapping of the Greenfield University's students have been arrested,” Aruwan said in a Facebook post on June 9, 2021.

“While it is our desire to see this happen by the grace of God, I cannot confirm the story making the rounds, and I have not received any information related to this from security agencies.”

A Facebook page called Tokunbo AremoOdua, which previously published the same false claim on June 9, 2021, amended their post and apologised for spreading falsehoods. 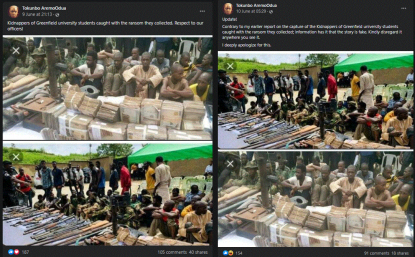 “Contrary to my earlier report on the capture of the Kidnappers of Greenfield university students caught with the ransom they collected; information has it that the story is fake,” the post reads. “Kindly disregard it anywhere you see it. I deeply apologize for this.”