A video has been viewed thousands of times in multiple social media posts that claim it shows medical aid arriving in the southern Chinese province of Guangdong in May 2021 after it faced a new Covid-19 outbreak. The claim is false: the clip has circulated online since March 2020 in reports about medical workers returning to the neighbouring region of Guangxi from the city of Wuhan.

The post’s simplified Chinese-language caption translates to English as: “Guangxi's medical team rushes to aid Guangdong. It seems that [the outbreak in] Guangdong is very serious?” 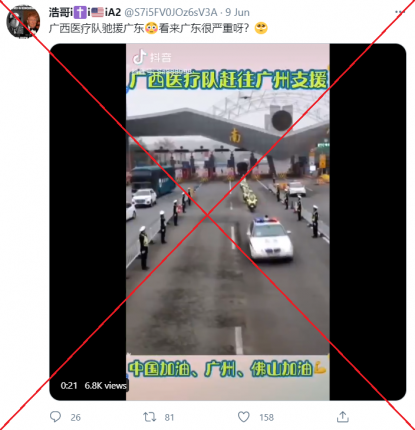 Guangdong and Guangxi are neighbouring areas located in southern China.

The misleading post circulated online days after authorities imposed restrictions and tested thousands of residents in Guangdong to curb a fresh outbreak of Covid-19 infections. AFP reported on the outbreak here.

The video was also shared alongside a similar claim here, here, here and here on Douyin, the Chinese version of TikTok.

The claim is false: the video is unrelated to the outbreak in Guangdong.

Multiple keyword searches found a similar video was published on March 20, 2020 here on the official Douyin account of the Guangxi police.

Chinese-language text overlaid on the top part of the video translates as: “Guangxi’s traffic police welcomed the second batch of medical teams who came home from Wuhan with the highest etiquette.”

The central Chinese city of Wuhan was the site of the first outbreak of Covid-19 in late 2019 before it spread worldwide, AFP reported.

Below are screenshot comparisons of the video in the misleading posts (L) and the Douyin video posted in 2020 (R): 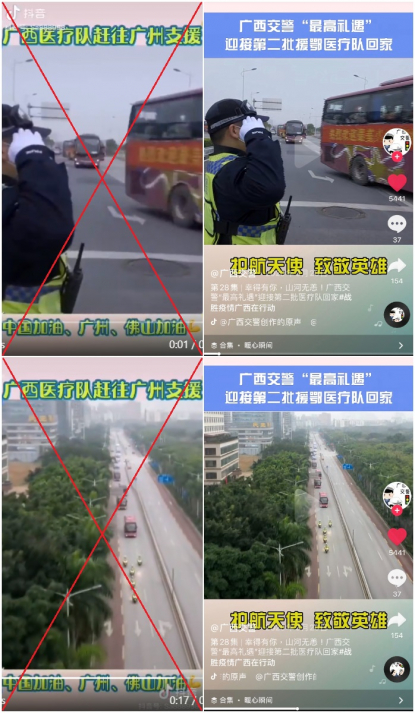