Posts shared hundreds of thousands of times on social media claim to show the point where the oceans meet in the Gulf of Alaska. This is false; only one of the images was actually taken in the Gulf of Alaska according to the people who took the original videos and photographs, and oceanographers said none depicts two oceans meeting.

“This is the Gulf of Alaska where 2 oceans meet but never mix” says a post shared in Canada on September 5. Multiple versions of posts making the same claim have been shared as far back as 2015, including this one from a Ghanaian actress which was shared nearly 900,000 times.

The post was also popularized by multiple Facebook pages based in India (1, 2, 3), one as recently as June 2020. 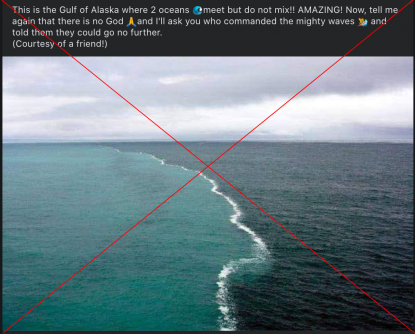 The false claim is made with one of three photos or videos, all from different sources.

One version uses a photograph of a large two-toned body of water. Through a reverse image search in Google, AFP found that the original photograph was taken by Kent Smith on July 4, 2010 and uploaded to the photo sharing website Flickr.

Screenshot of Flickr’s geotagging of the post, taken September 21, 2020

Kent titled his Flickr page “Merging Oceans” but explains that he believes what he captured was a photo of fresh water glaciers melting into the saltier ocean.

Melting glaciers and the expansion of ocean water as it warms from climate change accounted for most sea level rise through the 20th century, but ice sheet melt-off has become a major driver over the last decade.

Jay Cullen, Professor of Chemical Oceanography at the University of Victoria, British Columbia, explained by email, “These are called fronts and are common in the ocean wherever there is a contrast in water density that resists physical mixing. Fronts are common anywhere you have freshwater from rivers entering the marine environment.”

A second version of this claim uses screenshots of a video which AFP determined in a previous fact-check was filmed in the Strait of Georgia, near Vancouver, Canada in July 2015. 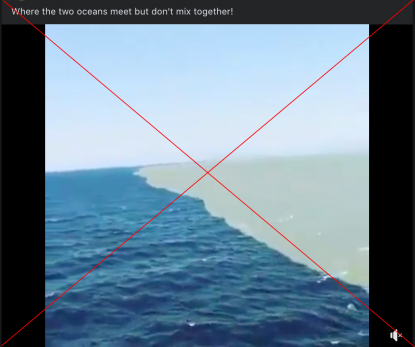 Screenshot of another version of the claim, taken on September 23, 2020

“It’s terrible that people would steal a video and make false claims about it,” Steve-Pearson, who filmed the original video, told AFP via Facebook Messenger.

The video’s caption was clear that it was filmed from a ferry traveling from Nanaimo, Vancouver Island (Duke Point) to Vancouver (Tsawwassen). It also said, “The river water (Fraser River) flows into the ocean water (Strait of Georgia).”

The shape and logo of the ship featured in the video seems to match that of BCFerries’ Coastal Inspiration ship, which travels the Vancouver to Vancouver island route. 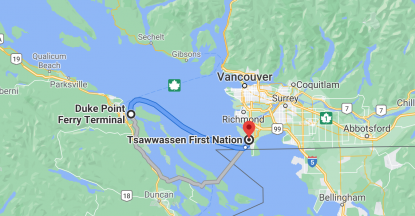 Screenshot, taken on September 23, 2020, of the BC ferries route

“If the picture comes from the Strait of Georgia, then the body of water discussed is in the Pacific Ocean basin” Carolina Dufour, Assistant Professor of Physical Oceanography at McGill University told AFP by email.

“The difference in colors is likely due to the composition of water, the grey-ish one could contain a lot of sediments suspended for instance, that could come from a river,” she added.

A third version of the claim includes a video, seemingly shot by a drone, of another two-toned body of water, claiming that it shows two oceans meeting in the Gulf of Alaska. 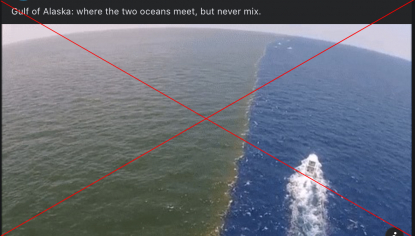 Screenshot of a third version of the claim, taken on September 23, 2020

Using InVid-WeVerify to get a frame-by-frame breakdown of the video, AFP was able to conduct a reverse image search.

This showed that the original video was posted by Marlin Magazine, which specialises in big game fishing, in November 2015.

“A true showing of colors when the Gulf of Mexico meets the Mississippi River,” reads the video’s caption.

“I can verify that the video is indeed the Mississippi River meeting the Gulf of Mexico, so the claim of ‘two oceans meeting but not mixing’ is indeed false,” a spokesperson for Marlin Magazine told AFP by email.

McGill’s Dufor explained, “The timescale for a river to discharge waters with a lot of sediments is short, days, compared to the time for the ocean to mix this new water with the rest, months or years.”

She added that many scientific papers have shown satellite images featuring the sharp contrasts in water color from these river plumes. 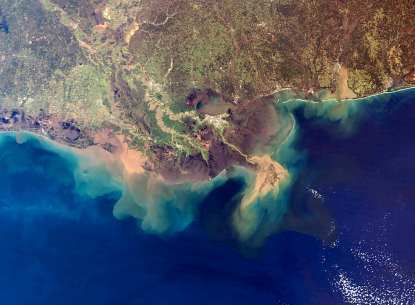 This April 12, 2001 NASA image shows the sediment plume created as the Mississippi River flows into the Gulf of Mexico (NASA)

“While on site (e.g. from a boat), these contrasts might not be as sharp as the one people saw in the Strait of Georgia but the phenomenon is the same,” Dufour concluded.