No, this video doesn’t show the point where the Atlantic and Pacific oceans “meet but don’t mix”

Various online videos show an ocean divided by a line, with waters clear on one side and murky on the other. We verified one of the videos: it is authentic and was filmed on July 2, 2015 in Canada by Maryan Steve-Pearson, an American tourist. Steve-Pearson’s video was shared over 1.5 million times on Facebook, but was erroneously labelled as evidence of a place  “where two oceans meet but don’t mix”.

“It's terrible that people would steal a video and make false claims about it”, Steve-Pearson, a Seattle resident, told AFP via Facebook Messenger.

One single Facebook post of the video was shared over one million times with the wrong caption. The video was also published in Spanish with the description “where two oceans meet”, as well as in Italian, French, and Hindi. 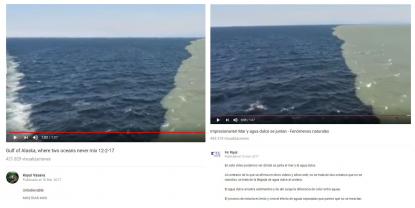 Steve-Pearson’s video was shot on July 2, 2015 on the Strait of Georgia, near Vancouver, Canada. Steve-Pearson filmed while crossing the strait on a ferry owned by Canadian company BC Ferries.

Steve-Pearson named her video on YouTube, “When the river meets the ocean”, referring to the Fraser River, which runs through British Columbia and flows into the Strait of Georgia near the city of Vancouver, where it meets the Pacific Ocean.

Her YouTube video attracted over 247,000 views, which is much lower than other YouTube accounts which reposted the video under the misleading caption, “where oceans meet underwater”.

“I realized it went viral when I saw a copy with like 10M views and thousands of comments,” Steve-Pearson explained. She filed a complaint to YouTube for the violation of her author’s rights, and the platform deleted that version of the video. However, in order to have all the other versions taken down, Steve-Pearson would have to analyze them one by one and indicate exactly which segments coincide with her video.

Screenshot of the email answer from Youtube to Steve-Pearson (AFP)

The Seattle accountant lamented the use of her video to spread false ideas. “It's obvious (that) it was shot in Vancouver as the video showed the BC ferries boat,” she said. 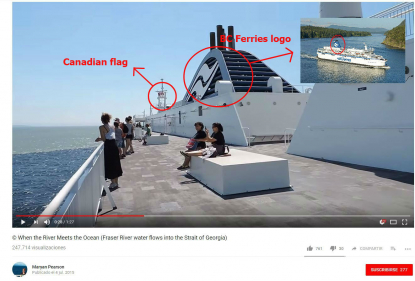 The story of the oceans

Two years before Steve-Pearson travelled to Canada, in 2013, the Anchorage Daily News website published an article clarifying the origin of the tale of the two oceans that meet. The note explains that the misinformation stemmed from a photograph by Ken Bruland, a science professor at the University of California at Santa Cruz, in the United States.

Bruland travelled to the Gulf of Alaska in 2007, over a thousand kilometers north of where Steve-Pearson shot her video, to analyze the presence of iron in the water with two colleagues, Andrew Schroth and John Crusius.

According to Bruland’s explanation to the Anchorage Daily News, which was later used by the fact-checking website Snopes, the color difference between both bodies of water is due to their composition. Although differing water composition does not prevent two bodies of water from mixing, it does delay the process.

Glacial runoff is one way water composition can be altered, when rivers receive heavy sediments, such as clay or iron, from nearby glaciers. This process delays the dilution of river water in the ocean.

Certain misleading publications claim that Steve-Pearson’s video depicts the meeting point of the Baltic and North seas, despite the fact that it was shot several thousand kilometers from there. 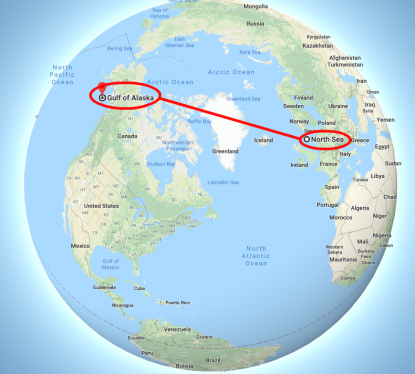 Although Steve-Pearson’s video is authentic, it does not depict waters that do not mix, nor does it show the meeting point for the Atlantic and Pacific oceans.