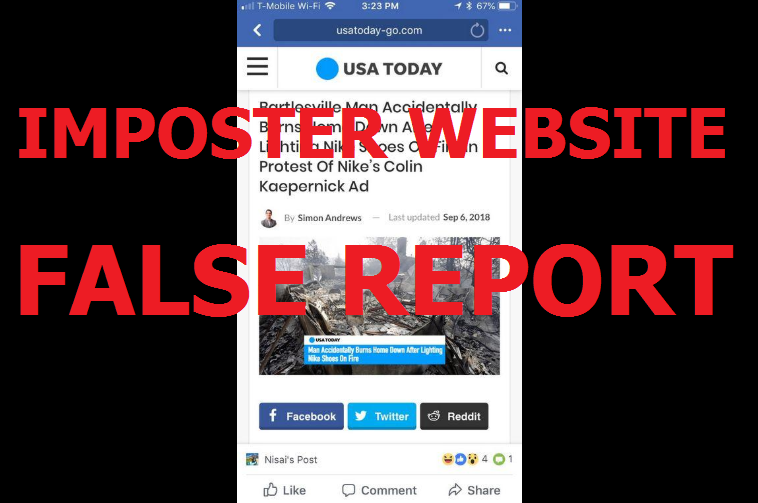 No, an Oklahoma man did not accidentally burn down his home after setting his Nike shoes on fire to protest the brand’s Colin Kaepernick ad.

A report claims a man from Bartlesville, OK was arrested after accidentally burning down his home when he set his Nike shoes on fire to protest a new advertisement by the sports clothing giant featuring American football player Colin Kaepernick. The story ran on an imposter website made to look like USA Today. Bartlesville police told AFP no such incident had taken place.

The report claims a 26-year-old man from Bartlesville, Oklahoma called Jason Helms put his Nike sneakers in his garage, soaked them in kerosene and set them on fire.

“The fire ended up spreading to the garage walls and ceiling before spreading to his actual home. Helms called 911 but by the time firefighters arrived they were unable to save his home,” the report claims.

Bartlesville police told AFP that the report was false.

“No such incident has taken place in Bartlesville, Oklahoma. The story is not true,” Bartlesville Police Captain Jay Hastings told AFP.

A Google reverse image search found that the photograph published with the story was used in 2016 to illustrate fire damage on an insurance website.

The story ran on an impostor USA Today site which was subsequently taken down.

The story also appeared on the tvtnews.com website which said the incident occurred in Lees Summit, Missouri. 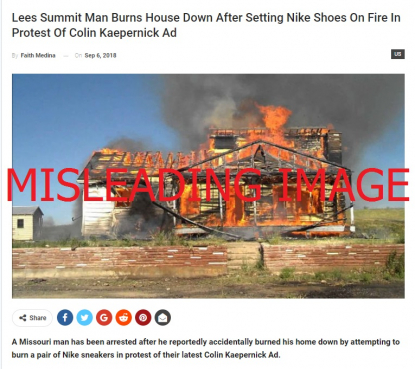 This story used an image of a house fire which has been widely used online including in this 2013 YouTube clip.

The article also ran on the Huzlers.com website, a satire site, which said the fire happened in Florida.