The image was published on Facebook here on January 30, 2020.

It shows a purported screenshot of a Snapchat story from an account called @livenews101, which shows a NSW Ambulance vehicle and two people, one dressed in a protective suit.

The text overlay in the image reads: “Hurstville - coronavirus is witnessed by neighbour” and “Any more send it in so we can keep everyone up to date”.

The post’s caption reads, in part: “Since the post i shared got deleted imma go ahead and post it myself…

“Its funny because if you google where the areas are that people have been confirmed to have the coronavirus, nothing comes up. It’s almost like they dont want us to know ?”.

“Rhodes, Burwood, Randwick, Kensington and Eastwood” are all suburbs in Sydney, in the state of New South Wales, Australia.

Since its emergence in the central Chinese city of Wuhan in late 2019, the novel coronavirus has killed at least 900 people and infected some 39,800 others in China alone, as reported here by AFP on February 10.

The image was also shared here, here and here alongside a similar claim.

The claim is false; the New South Wales health authority said no novel coronavirus cases have been confirmed in the suburb of Hurstville.

In response to the photo in an email to AFP on February 6, 2020, a spokesperson for the New South Wales Ministry of Health said: “There are still only 4 confirmed cases in NSW and none of these are in Hurstville (or any [of] the other locations listed in the post you have linked to).”

As of February 10, 2020, Australia’s Department of Health has confirmed 15 cases of the novel coronavirus in the country.

Below is a screenshot of the statement on February 10: 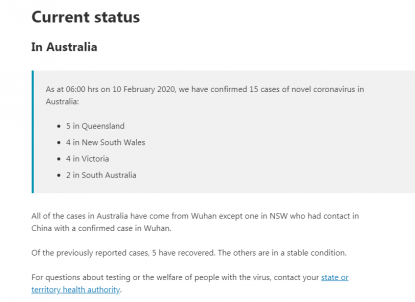 According to this press release by the NSW Ministry of Health, three of the four confirmed novel coronavirus patients in the state have been discharged;  a 53-year-old male, a 35-year-old male and a 21-year-old female. The statement said 22 other cases remained under investigation.