A photo has been shared on multiple posts on Facebook alongside a claim that it shows foreign staff in the IT department of a bank in Singapore. The claim is false; the photo was actually taken at the bank’s India branch.

It shows a group of people taking a photo in front of the logo of DBS Bank, a multinational bank based in Singapore.

The caption says: “Was told this is DBS IT Dept @ Changi (not Mumbai or Chennai). If this is true, I wonder what the 61% were thinking. Damn the policy of giving to foreigners what belongs to the locals.” 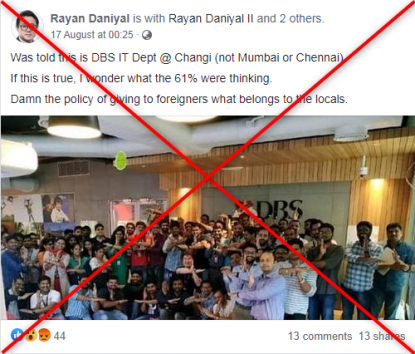 The photo has also been shared more than 110 times after it was posted here, here and here with a similar claim.

In an email to AFP on August 27, 2020, Shoma Narayanan, the head of group strategic marketing & communications at DBS Bank India, said: “The photograph was taken in the DBS Asia Hub 2, Hyderabad...around a year ago, at an internal conference”.

A photo on the web page of DBS Asia Hub 2 – described as “the bank’s first technology development centre outside Singapore” – shows the same poster of a child seen in the photo in the misleading post.

Below is a screenshot comparison of the photo in the misleading post (L) and the picture from the DBS website (R), with the poster circled in red by AFP:

The DBS logo background and wood panel wall seen in the misleading post are also visible in this May 3, 2019, post, which is also geotagged to DBS Asia Hub 2 in Hyderabad.

Below is a screenshot comparison of the photo in the misleading post (L) and the Facebook photo (R), with the logo circled in red by AFP:

DBS Bank also issued this statement on Facebook on August 15, 2020. It reads: “It has come to our attention that there are images, purported to be taken in DBS Singapore, being circulated on various chat groups and social media platforms. We would like to clarify that the images were from our India office and not Singapore.”