Photo shows victims of a 2017 suicide bombing in Mali, not dead troops from Ethiopia

As tensions grow between the Ethiopian army and dissident forces in the northern Tigray region, multiple posts shared alongside an image of flag-covered coffins purport to show soldiers killed in the clashes. This is false; the picture in fact shows the caskets of victims of a 2017 bombing in Mali.

The image has been shared thousands of times to represent both sides of the crisis. While some (here and here) claim it shows the bodies of fallen Tigray fighters, others (here, here and here) allege the caskets contain the bodies of Ethiopian government forces.

Tens of thousands of Ethiopians have fled to neighbouring Sudan after Prime Minister Abiy Ahmed launched a military campaign against dissident Tigray forces on November 4, accusing them of attacking two federal military camps in the region, and of defying his government and seeking to destabilise it.

Abiy on Sunday gave leaders of the Tigray People’s Liberation Front (TPLF) 72 hours to surrender ahead of a threatened all-out assault on their capital Mekele. 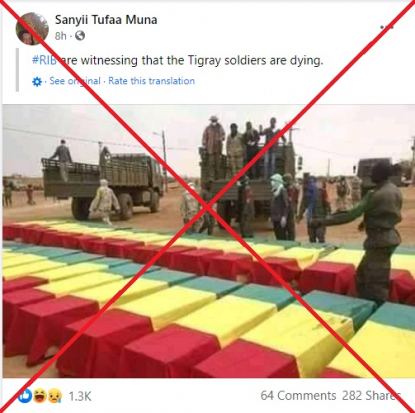 A screenshot taken on November 20, 2020 showing the out-of-context photo

The TPLF led the overthrow of Mengistu Hailemariam, head of Ethiopia’s military Derg regime, in 1991 and dominated the country’s politics until Abiy became prime minister in 2018.

The party continues to rule Tigray, one of 10 regional states under Ethiopia’s system of federalism whereby regions are delineated by ethnicity and language.

But TPLF leaders have complained of being sidelined by Abiy and blame him for the country’s woes.

The bitter feud with the central government – which regards the TPLF as a criminal administration – led the party to hold their own elections this year despite the postponement of national polls due to the coronavirus pandemic.

The claims in the misleading posts also suggest that the caskets were covered with the Ethiopian flag. But this is false; the picture shows coffins draped in the Malian flag – neither the flag of Tigray nor Ethiopia. 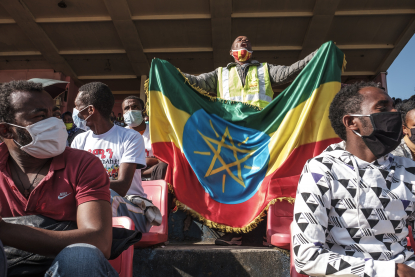 Ethiopia’s flag is green, yellow and red, similar to Mali’s, but the colours run horizontally and include a yellow star on a blue background in the centre. 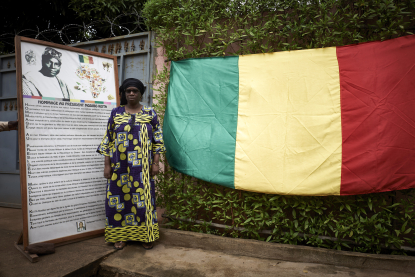 AFP Fact Check ran multiple reverse image searches and found the photo of the flag-draped coffins in a news article from 2019, suggesting that the image had been circulating online before the unrest in Ethiopia began earlier this month.

Another result from a 2017 news article on a suicide attack in Mali indicated the image was taken for AFP in January of that year.

According to the caption in AFP’s archives, the picture shows soldiers standing “near caskets at a funeral ceremony for victims of January 18 suicide bomb attack that ripped through a camp grouping former rebels and pro-government militia in Gao, in troubled northern Mali, on January 20, 2017, in Gao”. 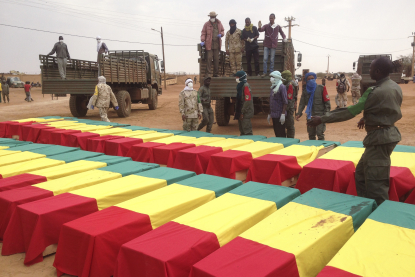 AFP photo from Mali -- not Ethiopia. (Photo by STRINGER / AFP)

More than 70 people died in a suicide bomb attack in Mali targeting militia groups committed to restoring peace in the African country, according to an updated toll on January 19, 2017.