Multiple Facebook posts have shared a photo they claim shows a man carrying a horse on his shoulder for three kilometers to hospital after the animal was bitten by a snake. The claim is false: the photo actually shows Ukrainian strongman Dmytro Vasilievich Khaladzhi, who routinely lifts horses, among other heavy objects, to demonstrate his strength.

The photo was published here on Facebook on February 21, 2021.

The Hindi-language text on the photo translates to English as: “This man walked three kilometers holding his horse on his back after it was bitten by a snake, carrying it to hospital to save the animal’s life.”

The image was also shared here, here, here and here on Facebook with the same superimposed text.

A reverse image search found the photo was published on UK daily The Sun website here on November 27, 2017, in a report about Ukrainian weightlifter Dmytro Khaladzhi, who performs what the newspaper called "extraordinary feats of strength”. 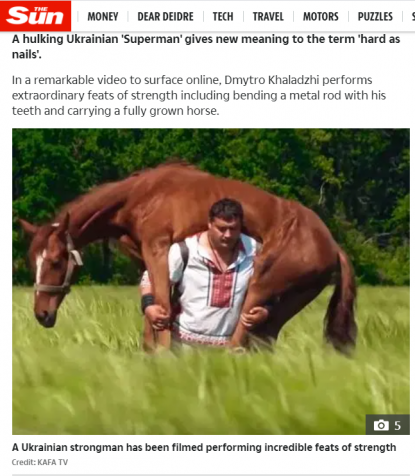 Screenshot of the image published in The Sun report

“HARD AS NAILS This crazy hard man carries horses on his back, bites through metal and gets RUN OVER just to prove how strong he is,” says the headline.

A Google keyword search also led to this YouTube channel, this Facebook page and this Instagram account which contain multiple photos and videos of the same man perfroming different acts to show his strength.

For example, this Instagram video shows Dmytro trying to walk after lifting a similar looking horse on his shoulder while wearing the same outfit as seen in the misleading Facebook post.

“Video from an American channel. In the video you can see (me) carrying horses, passing cars, a  merry-go-round with people weighing 715 kilograms and carrying rocker arms with children weighing 525 kilograms and many other things…” reads the Russian-language caption of the Instagram video shared on January 9, 2021.

Multiple people can be seen addressing the man as Dmitri and admiring his acts of strength in the comment section of the video.

There are several videos of Dmitri that show him trying to walk after lifting different animals on his back on his Instagram page, for example a bull here, a camel here and a white horse here.

Dmitri did not respond to requests for comment from AFP.

Snopes debunked the same claim about the photo three years ago.