A Facebook account using the name and photo of a Ugandan police spokesman has been spreading false information, including that former presidential candidate Bobi Wine is planning violent demonstrations in Uganda. This Facebook account, however, does not belong to the spokesman, Commissioner Fred Enanga, who dismissed the account as fake. He added that the Ugandan police have not issued statements regarding any planned violence.

“Bobi Wine Should not at Any Point Think about Putting the Nation at War, Uganda Security is Tight And We Are Deploying Our Officers Around the nation to ensure that this young man Doesn’t Bring Caos in the nation (sic)”, the post reads in part. 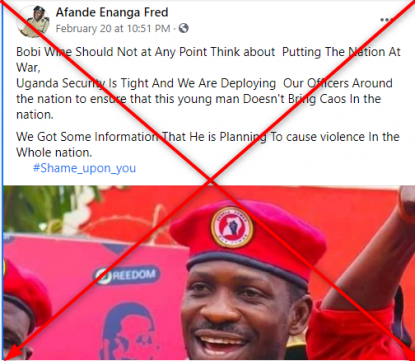 On January 16, 2021, Uganda’s Electoral Commission declared incumbent Yoweri Museveni the winner of the election with 59 percent of the vote. Bobi Wine earned 35 percent. Wine rejected the results of the election, claiming his victory was stolen.

Bobi Wine had filed a lawsuit to challenge the election results, but he withdrew his case on February 22, 2021, saying there was “bias” from Supreme Court justices assigned to the case.

“As I Told earlier, Its on a serious Note That a certain Group of people are planning to start A Violent Demonstration, They are planning to cause violence in the Whole parts Of the Nation starting on 9th-March-2021 (sic)”, the post reads in part. 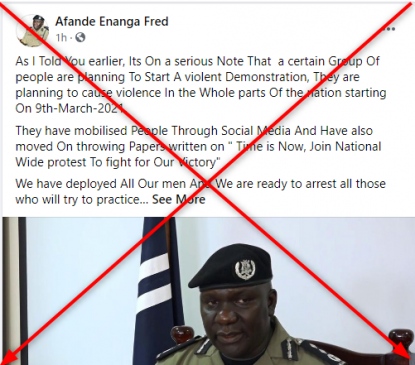 AFP Fact Check found no evidence that the Facebook account sharing these posts is owned or managed by Commissioner Enanga. Facebook's transparency information shows that the page was created on February 23, 2020, under the name “Iddi Amin Dada". The page’s name was recently changed to “Afande Enanga Fred” on February 20, 2021.

“Afande” is a Swahili word meaning police or law enforcer. 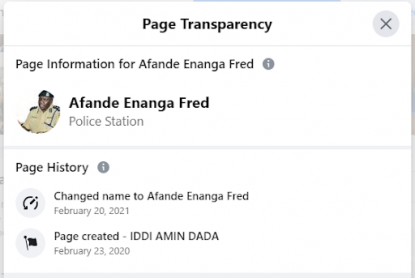 In a phone interview with AFP Fact Check, Commissioner Enanga confirmed that the Facebook account is not his.

“I do not own or manage the account in question. We are investigating the people behind the account and the posts tarnishing the image of Uganda’s police force,” Enanga said.

Uganda's police only publish official communication on their official social media pages, their website, and in mainstream media, according to Commissioner Enanga.

"The Ugandan police has not issued any statements about any planned violence in the country," he said.